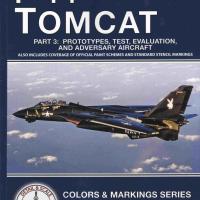 Detail and Scale has been a cornerstone reference for modelers for decades covering all types of aircraft in great detail. The Color & Markings series does just that, cover the color and markings of a specific set of planes in great detail with superb pictures and detailed test. This book, Part 3, written by Bert Kinzey and Rock Roszak, covers the F-14 Tomcat prototypes, test, evaluation and adversary aircraft.

The table of contents is large and gives a great view of things to come:

I won’t go into each section specifically, but we can examine one section as a demonstration of what is in each- the chapter on the VX-9 Vampires. The section starts with the formation of the squadron in 1994 from the merging of VX-5 and VX-4. The movement of the squadron is also tracked until it was disestablished in 2004. There are seven marking schemes shown in clear color pictures of the planes involved. Lastly, the chapter also covers Vandy 1, the famous black F-14 with the Playboy logo on the tail with detailed text and six additional pictures. All the pictures are crisp and portrayed in a matte finish.

This repeats for each chapter covering various squadrons listed in the table of contents. From a modeler’s perspective, the two appendices are gold! One goes in depth on the different paint schemes and breaks them down into three parts- Light Gull grey over white, Light Gull Grey, and tactical schemes. Profiles are shown along with pictures of aircraft in those schemes. Lastly, stencils and markings are a detailed look, with many actual pictures of the all those many, many stencils on the F-14. This would help any modeler accurately place all those decals with pictures and diagrams of each stencil. That alone is worth the book’s prices.

This is an excellent book for both history fans and modelers but for modelers, it is gold. From finding unique schemes to placement of decals to getting details about a particular scheme, it is superb. Highly recommended

My thanks to Bert Kinzey, Rock Roszak and Detail and Scale for the opportunity to review this book.