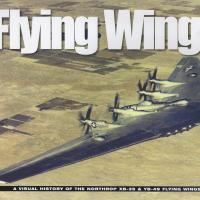 Do you have one of the old AMT/ERTL XB-35 or YB-49 kits sitting around just waiting for the perfect reference? Or perhaps you have one of the small-scale Dragon kits and you want to add just that little something extra. Well, your wait is over, you’re out of excuses. This book is the AMS sufferer’s dream (nightmare?) when it comes to those two visionary aircraft.

The book opens with a small section on the history leading up to the contract to build the aircraft. We’re told about Jack Northrop’s tinkering and his dreams of creating a plane to confirm his opinions. He felt that every part of a plane except the wing was just so much excess baggage. There are a few photos of the N-1Ms and the N-9Ms Northrop built to prove his theories. Then, into the meat of the book, we see photos of the entire construction of the B-35, as well as detail photos of crew areas, gun turrets, bomb bays, wheel wells and gear, and engines. Most of the detail photos seem to have been taken during testing of the aircraft, thus showing very little wear and tear. This section covers two-thirds of the book.

The YB-49 is covered in the last third of the book. The photos in this section are taken under similar circumstances and highlight the differences that show between the jet powered YB-49 and its predecessor. The book ends on a photo of one of the YB-49s after being chopped up and a picture of the vindication of Northrop’s dream, the B-2 Spirit.

As I said earlier, this book is exactly what is needed to super-detail your XB-35 or YB-49 kit. It is also a great resource if you just want to know more about the details of what were, at the time, truly revolutionary aircraft. Highly recommended.

Thanks to Ampersand Publishing for donating the book for review and to IPMS/USA for the opportunity to review it.