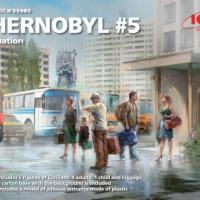 ICM continues with its fascinating series of Chernobyl “instant dioramas” with the latest being a scene depicting the evacuation of civilians from the threatened region around the power plant disaster. In this case, five figures are provided, along with an apartment balcony, a small pot and a printed background to bring it all together.

The figures include one older gentleman, a young man and woman, and a somewhat matronly mother with young daughter. All are excellently sculpted and show lots of individual character along with natural poses. If there is any objection to the sculpting, it’s that none of the figures display the level of abject terror that I, personally, would be undergoing if such a thing were happening to me. In fact, all of the poses appear to be relatively relaxed. Maybe no one really knew what was happening.

Molding in general is quite good, and the figures go together well. The young girl’s skirt is split, so a little putty might be required there. Getting the mother and daughter to align correctly together requires a little bit of patience in order to ensure that all feet touch the ground. The suitcase detail on a couple of figures is a bit soft, and I would personally recommend replacing them with pieces from MiniArt’s luggage set.

Speaking of poses, all of these figures would also be suitable for just about any modern domestic travel scenario one could come up with, so they’re extremely versatile and not just confined to this scene. They also don’t appear to be particularly “ethnic” in any real sense so they could stand in for just about any nationality you desire.

The kit also includes a front portico for an apartment building and a small, nondescript pot. I tried to match the colors on the printed background for the portico, and the small pot, which could be a waste bin or something similar I turned into a “tasteful planter” to go with the printed flower bed on the background.

One of the fun things about painting civilians is that your pallet is essentially unlimited. I permitted myself a bit of fun in that area, especially with the older man’s polo shirt, which I painted to resemble a Hawaiian shirt in my possession. I’m not 100% certain that it’s appropriate to the scene, but since the disaster occurred in April I can pretend that it was a hasty dressing for the evacuation. The others were just as enjoyable, and it was fun adding little personal bits, such as the sneakers on the young man or the peasant blouse for the girl or the “My Kitty” case for the daughter.

The figures really look good with the provided backdrop, although the scene is a little spartan considering the space they occupy. Figures from Preiser or some other manufacturer of civilian figures would effectively fill the space a bit more, or perhaps a couple of figures from the previous Chernobyl releases. In any case, there’s a lot of interesting options one could go for with this set. Whether you choose to replicate the cover on the box or use the figures in some other setting I can recommend this kit without reservations. It’s just plain fun (and how often can one use that word in connection with the Chernobyl disaster?).

My thanks to ICM for continuing this series (although where they go from here is anybody’s guess) and to IPMS/USA for letting me play with it. Thoroughly enjoyable. Stay safe, everyone, and happy modeling!