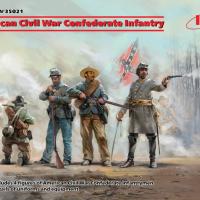 Wow. Just when you’ve given up on seeing something, it suddenly becomes a big hit in the modeling industry. Long, long ago, Dragon released a set of Union Civil War figures in 1/32nd scale, which I was totally thrilled to see. I bought an entire case of them, and then waited for baited breath for the follow-up Confederate Infantry to come out. And waited . . . and waited . . .

Obviously, it was never released. However, recently two Ukrainian companies have suddenly released figures from that era – Masterbox and now ICM. I couldn’t be happier.

This particular set of Confederate infantry provides three soldiers in a variety of uniforms, one firing his weapon, one reloading, and one standing ready. It also includes an officer with both pistol and sword. Detail is excellent, with really good facial expressions and plenty of potential for conversions. Curiously, the only omission I discovered in the molding was on the figure reloading his weapon. Inexplicably, ICM failed to provide him with a belt buckle. Fortunately, I had some bits from a photoetch fret from Shenandoah Miniatures to rectify this, although realistically a small square of styrene would serve equally well.

When I first saw these kits coming from ICM, I was hoping beyond hope that they would follow the pattern set by their wonderful World War 1 figure sets and include additional equipment. In fact, they supply TWO entire separate sprues of equipment, although none of the equipment is identified in the instructions. I went ahead and did some research, and believe I’ve sussed out what they offer:

So no matter how you equip your figures, you’re going to have ample extras which should prove exceedingly useful for other figures. The set offered by Masterbox, for example, is quite good but seems to suffer from a lack of some essentials. Your leftovers can easily rectify this problem if you choose.

All of the figures assemble with a minimum of fuss, although most have two-part arm configurations due to the complexity of the positions. A bit of putty is useful here to get everything evened out. All four figures look terrific and do a good job of representing the wide variety of uniforms found in the Confederacy, especially later in the war.

The figures paint up exceedingly well and really look the part when complete. There’s lots of conversion potential, and I can guarantee I will be buying extra sets to make some of the more colorful examples from that terrible war. I cannot recommend this set highly enough for anyone interested in this remarkable period in American history. With luck, ICM will continue releasing more along this line. Wonderful!

Many thanks to ICM for taking a shot at this particular market, and to IPMS/USA for a chance to play with these lovely figures. Happy modeling, everyone, and stay safe!