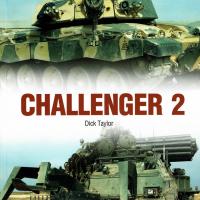 Kagero Publishing is one of the world’s preeminent publishers of military vehicle and aircraft books aimed at the modeling community. The book under review is from their Photosniper series, and the author, Dick Taylor, is a leading author on British military vehicles. The book is 88 pages in length, with a card cover. The pages measure 8.3” by 11.7”, on glossy paper. All the photos within its covers are color, with good production values. There are also three pages of color profiles, covering 6 different vehicles.

The book is divided into four chapters, starting with Chapter 1: Design & Development. This describes the tortured development of the Challenger 2, resulting from a failure of Britain’s previous Main Battle Tank, the Chieftain, to effectively meet the requirements of Britain’s armoured forces. With British forces falling behind Soviet forces in terms of both quality and quantity when it came to tanks, a replacement for Chieftain was desperately needed. Initially it was thought the British Army might buy a foreign design, such as the US M1 Abrams or the West German Leopard 2. However, this was politically unacceptable to the then British Government. A failed British tank export order to Iran eventually landed a compromise in the laps of the British Army, in the form of a tank the British named Challenger 1. However, this was seen as a stop gap measure, and the only British tank production company left in business, Vickers, was asked to provide a vehicle that would meet the needs of British tank forces into the future. After much messing about, and initially supplying a poorly performing tank, Vickers eventually worked out most of the bugs of what eventually became Challenger 2.

Chapter 2: Challenger 2 described, is, as you would expect, a chapter describing the various features of the tank, such as its main armament, fire control system, automotive system, armor protection etc.

Chapter 3: The armoured regiment and squadron. This chapter goes into detail describing the two main British armor units, the larger armored regiment, and the armoured squadron, which is a “company-sized organization under the command of a Major”, being the basic sub-unit of a Challenger 2 regiment. This chapter also includes paragraphs on training and battle simulation.

All four chapters are supplemented with numerous color photographs reproduced to a high standard.

I very much enjoyed reading this book. It was well written, and very informative for someone like myself who only knew the Challenger 2 story vaguely. For the modeler, there are plenty of well-reproduced photos, all in color, to help with detailing the various kits in 72nd and 35th scale that exist. If modern British tanks interest you, then I can highly recommend this book for your library. I would like to thank Casemate Publishers for kindly supplying IPMS USA with the review copy.