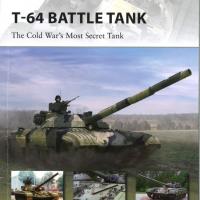 The New Vanguard series is Osprey’s long running series that looks at weapon systems through the ages. One of their most prolific authors, Steven J. Zaloga, has turned his considerable talents toward one of the most least understood Soviet Main Battle Tanks, the T-64. Unlike other Soviet tanks that were exported around the world and have seen combat, the T-64 has largely remained within the confines of the old Soviet Union, making this volume on the slim side. As with all Osprey books, this one includes color profiles by Ian Palmer, a cut away of the vehicle, and plenty of photographs.

As the subtitle suggests, the T-64 was the Cold War’s most secret tank. Unlike other Soviet Main Battle Tanks that were exported around the world, the T-64 was not. Until the recent insurgency in the Ukraine, the T-64 had really not seen any action. As with most works penned by Steven Zalgoa, he provides a concise and seemingly well informed overview of the development and technical details of the tank. The T-64 reaches back to the 1950s and was ground breaking in providing the first version of composite armor to be fielded. There were also attempts to refine a missile system, similar to the Shillelagh that was being developed in the United States. As with the US version, it never met expectations. Production vehicles were fitted with an auto loader for its 125 mm tank rifle. Unfortunately, the first production models had a balky engine and a fragile suspension, making it a less than ideal vehicle for those in the field. In spite of the teething troubles, reliability improved over earlier models, but there were rifts among the primary users, the Soviet Army.

The key to this story is that while the T-64 was being developed, other Soviet design bureaus were working on designs that would result in the T-72 and the T-80. While the T-64 did go into series production, only 3,900 were manufactured and saw service. It was more expensive to produce than other models and in terms of American and other NATO vehicles of the late 1960s and 1970s, it was certainly competitive, but was by no means an extraordinary vehicle. The vehicles were pulled from front line service and were regulated to other formations. With the break-up of the Soviet Union, many went into service with Ukraine, where many of the vehicles were modernized.

As with all of Steve Zaloga’s works for Osprey, this is a very helpful reference for an important piece of Soviet Armor that is not well known in the west. With the recent release of T-64 variants by Trumpeter, this volume will prove to be a handy reference. Anyone with an interest in modern Soviet armor will find this a helpful addition to their library.

My thanks to IPMS, and Osprey Publishing for giving me the opportunity to review this book.