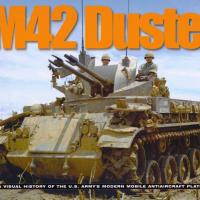 Following the Second World War, the United States Army developed requirements for a modern armored and mobile anti-aircraft platform to deploy with armored and infantry forces. Filling that requirement was the M42 Duster. Based on the M41 Walker Bulldog light tank platform and armed with the Bofors M2A1 dual 40mm anti-aircraft cannon, the M42 became the mainstay of mobile armored anti-aircraft support for both the U.S. Army and Marine Corps from 1953 through the Vietnam War. 3700 Dusters were produced and served with several allied nations in addition to the United States

A veritable reference bonanza for the scale modeler, David Doyle’s M42 Duster contains hundreds of color and black and white images in its 120 softbound pages. While the majority of the volume chronicles the Duster operating in Vietnam, a sizable section is devoted to the early years of Duster production and peacetime training, and an equally-sizable section provides a fabulous walk-around of a restored M42 at the Americans in Wartime Museum “Tank Farm” in Nokesville, Virginia.

Although traditional “body” narrative is limited to the Introduction, all of the photographs are richly captioned and serve to paint a rich and detailed picture of the M42, its operational context, and its physical details.

Ampersand’s “Visual History” series provides modelers exceptional “bang for the buck” value, and David Doyle’s M42 Duster is no exception. For any modeler or military vehicle aficionado looking for a great visual reference of the M24 Duster, this title is a “Must Have.”

Many thanks to Ampersand Publishing Group for the autographed review sample and to IPMS/USA for the opportunity to share this review.

In the field Vietnam
Previous Next