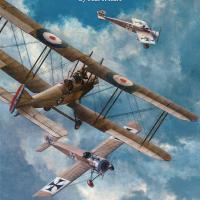 The cover features a sensational painting by Paul Monteagle of the crew of RAF BE2c 1741 under attack from two Fokker Eindeckers in 1915. Ronny Bar contributes six large color side profiles, plus the top and bottom views of RAF BE2c 1709 circa 1915. Mick Davis grabs the pullout centerfold with three pages of 1/48 general arrangement line drawings of the RAF BE2c. For those of you that still dabble in that odd 1/72 scale, Mick Davis also provides the same drawings on four pages, plus more! There are no 1/32 arrangement drawings so I’m guessing that rumored Wingnut Wings kit is not quite on the drawing boards. I counted 65 black & white photographs, plus 36 color pics.

Paul Hare provides the basics of the RAF BE2 development history before launching straight into the BE2c development. The BE2c continued to be a design that was being constantly tweaked and many of those improvements are depicted in the photographs and well detailed captions. The actual arming of the BE2c with methods of mounting guns to return fire is well done by Paul Hare. The chapter on ‘Questions in the House’ brings into play the ever-present political situation. Having members of Parliament criticizing that using the BE2c constituted murder is always a great way to start a row. The introduction of dual controls on the BE2d relegated it to essentially being a trainer due to its decreased performance. Performance improvements were continued, though, and resulted in the BE2e for any new production.

Paul Hare completes this Datafile with detailed color photographs of The Vintage Aviator Ltd.’s two flying BE2c reproductions. This is a superb reference and is absolutely essential to building your Roden and Airfix kits of the RAF BE2c. Highly recommended!