Images of War: US Naval Aviation, 1898-1945 "The Pioneering Years to the Second World War" 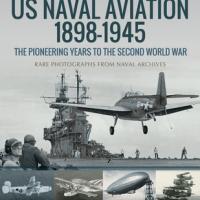 This book, part of Pen and Sword’s “Images of War” series, traces the development of naval aviation in the United States from the late 1890’s through the end of World War II. Starting with balloon development, which became a military issue during the American War Between the States, the Navy’s leaders became interested in this field towards the end of the 19th century.

It became clear to the founders that the free balloon was of little use to the Navy, and that a mechanical aircraft would be necessary if anything significant was to be achieved. Although the Wright Brothers had flown their airplane by 1903, it was only a few years later that Navy officers began to take interest in the heavier than air airplanes that were being developed throughout the world. A major issue was the question, “exactly what are we trying to achieve, and what will be using these aircraft for”?

A major problem was developing an airplane that was able to take off and land aboard a ship. Another problem was operating off of water, which meant the development of seaplanes and flying boats. As World War I approached, the floatplane had been somewhat developed, but it was the British who developed the first purpose-built aircraft carriers, although previously, some aircraft had been launched and even recovered from structures built atop gun turrets on board Navy warships.

During the twenties, most naval aircraft development occurred in Britain and the United States, with other countries, like Japan, watching developments. By the late twenties, Britain, The U.S., and Japan had developed specialized aircraft carriers, which were built to be as fast as other conventional warships, and these countries even entered into treaties to reduce the size of these and other warships. By the middle thirties, not only were aircraft a major part of the world’s navies, but hydrogen and helium filled dirigibles were being used for naval missions, some even as experimental aircraft carriers, although that practice never became a practical matter. As World War II approached, navies began to expand, and smaller ships were converted to become “light” carriers, especially in the U.S. and British navies.

Aircraft development continued along with that of warships, with specialized missions, such as fighter, bomber, torpedo bomber, observation-scouting, and long range patrol becoming standard roles for Naval aircraft. Performances of naval aircraft usually kept up with army aircraft performances, although rarely did an airplane designed to army requirements also fulfill Navy needs, mainly because of the carrier operation requirement.

When the Japanese attacked Pearl Harbor, our navy was caught at a disadvantage, although it was fortunate that we didn’t lose any carriers during that attack, and although our aircraft were in some ways at a disadvantage when operating against the Japanese, tactics were developed to offset performance factors, and newer types were coming into use, and the U.S. industrial capacity far exceeded the Japanese ability to manufacture aircraft, and our ability to train pilots and aircrew was infinitely better. With better airplanes, such as the F4U Corsair, F6F hellcat, SB2C Helldiver, and TBF Avenger, and excellently trained crews (American pilots usually didn’t enter combat with less that 300 flying hours, while the Japanese towards the end were sending pilots into combat with less than 100 hours) our ability to produce aircraft and warships meant that it was only a matter of time before the Japanese homeland would be invaded. That was like private pilots trying to fight against commercial pilots. However, the development of the atomic bomb made the invasion unnecessary, and the Japanese after that had to sell us motorcycles in order to inflict any more casualties. (Sorry about that one.)

This book gives a graphic account of the development of naval aircraft and aircraft-related warships, and shows how these were used to achieve the goals of navy planners. If a reader was unfamiliar with the general developmental trends caused by World War II, after finishing, he should have a good understanding of the reasons why developments occurred, and why certain strategies were carried out. The author has written a number of books on this general subject, and this one could very well be used as a part of a high school or college program to show students what happened and why things came out the way they did.

The book is illustrated with almost 200 photographs, all official black and white pictures, all of which illustrate some point that author is making. The photos were all taken by official Navy photographers, and show aircraft, crews, and ships actually in combat. There is even some coverage of Navy actions in Europe and the Mediterranean, and photos of British aircraft. Every area that Navy operated in is discussed, and even the anti-submarine campaign against the German U-Boats is covered.

Even though it is not a long book, it is very complete for its size, and especially if the reader does not have an extensive background, he will finish the book having a pretty good idea what happened and why it happened, and what the planes and ships looked like. The book does not go into intensive detail, but that is not its purpose. The photos give a very good impression of the nature of the war, and the text serves to explain it very well. We were very fortunate to have the leaders that we had, and we certainly should be grateful that they were able to achieve what they did. This is a good general text, and well worth getting if you are interested in getting a general account of these developments. Highly recommended.

Thanks to Pen and Sword, Casemate, and Phil Peterson for the review copy.