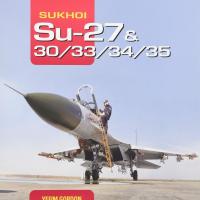 I would like to thank Specialty Press for this review sample

This is a revised and expanded edition of Yefim Gordon’s original book on the Su-27 published in 2007. I thought the original publication was a large 544 pages. This book in comparison is 720 pages, which gives you an idea of how much additional material has been added. It is an impressively comprehensive tome on the Su-27 family and renders the other previous book obsolete.

The layout was in Moscow by Polygon Press; it was printed in Bulgaria by Multi-print; Published in England by Crecy; and Published in the U.S. by Specialty Press. In addition to being an international effort, this book is heavy! Imagine my surprise when I went to lift the box at my doorstep. A hard cover edition, printed on clay paper, and in all color, his book falls into the category of an unabridged Webster’s or Oxford English Dictionary. It really needs its own maple book stand on a carousel in your library.

Yefim Gordon, with the help of Dmitry Komissarov, has significantly revised this edition to not only include the Su-27, but now has also included or expanded the knowledge on the whole family of airframes: the Su-30 (tandem two seater, non-trainer), Su-33 (Naval Flanker), Su-34 (two seater side-by-side), and the Su-35 (single seater with thrust vectoring). Plus, he has provided more insight into the Chinese licensed and un-licensed production of its Su-27s, J-11s, and J-15. (Here it is obvious that Russia has not been pleased with its dealings with China in technology transfer.) The book retains the time-tested format of his previous books including the details of development and component details of the aircraft for the mechanics in the crowd. There are now over 1,200 photos and drawings – the book is dense with imagery. The tabulation of data is also astounding. The breakdown of the chapters is as follows:

In addition to comprehensive updates on the development and fielding of the Su-27 variants, the authors have included an extensive update on users and operations. The small air forces operating Soviet/Russian built aircraft is always a fascinating part of this series of books for me. For instance, Malaysia and Venezuela now have Su-30s in their air forces. In both cases it is an odd juxtaposition given that these air forces up until that moment operated U.S. and Western European aircraft, and still do. The authors approach this section with a good balance of detail and readability.

With regard to Su-27 operations, a large expansion of information is a chronicling of Russian air operations in the Georgia/Abkhazia/Ossetian region and of course Syria. This latter has been of more mixed success for Russian given the several incidents resulting in loss of aircraft and the tempo of operations, including shortages of smart munitions (a fact the authors mention). Not discussed in any detail that my quick read revealed was the operation of the RFS Kuznetsovand her complement of Su-33s in the Eastern Mediterranean, in support of the Syrian regime. This seemed more symbolic than effective given the operational shortcoming of the ship and her aircraft. Without catapults the Su-33 on Kuznetsov cannot operate with drop tanks or air to ground ordnance, so during this period they ferried ashore for refueling and arming prior to mission operations.

Later in the book, the authors provide good images of the Chinese J-15 fighters. These aircraft, while suffering from many of the same limitations of a lack of catapults on Laoning, are pictured with heavier load outs. Perhaps this is a result of the weight savings the Chinese achieved in this aircraft as discussed in this book.

This is yet another volume in the encyclopedia of Soviet/Russian aviation produced by Yefim Gordon and other contributing writers. It is quite a body of work and this book is an invaluable addition. I for one could never keep straight all of the developmental variants pursued in the 1990s and 2000s in the Su-27 family. This book provides clarity while retaining details. It is one of Yefim’s best organized and written efforts. It remains an important aircraft, so if you are fascinated by the Su-27 family or have just a passing interest, this is a must have book in your library.

Thanks to Specialty Press for providing the review sample.