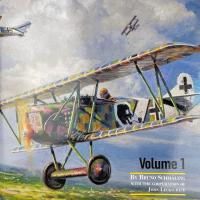 This first volume of a multi-volume set is going to excite a lot of people. In addition to the photos and color plates of these aircraft, historic documents such as flight rosters, vintage newspaper clippings, hand-drawn sketches and flight line photos are included in this highly visual presentation of German WWI aircraft markings.

The book is beautifully printed on quality paper and begins by explaining the research done by both Schmäling and Leckschid over a period of many years. According to the publisher, Schmälling (a former modeler) started interviewing the old pilots in 1974 when he was in high school and has continued his research to the present. In 1976 he started working with Alex Imrie, the most well-known early researcher into the German air service, to document the colors of these airplanes, especially fighters. His continuing research has made Bruno the world’s leading expert on Jasta Colors. He has at least 14,000 photos given to him by the pilots he interviewed, and many of them appear in this book.

The book is an easy read and doesn’t necessarily need to be read cover to cover. I preferred to jump around a bit and treated it like a reference book without a problem. It’s visually interesting and full of information about the WWI fighter pilot experience I’d never read before.

The most impressive part of this book (and hopefully, the series) is the wartime images of these planes. Many are previously unpublished and are of both pilots and aircraft in a variety of situations. Over 2/3rds of the book consists of aircraft profiles with full color plates and vintage photos of the aircraft profiled.  Included are various models of Fokker, Pfalz, Albatros, Rumpler and Halberstadt aircraft from the mid to late-war period with informative text and trivia about their pilots, jagdstaffels and markings.

From a modeler’s perspective, many of the plane markings would be easy to reproduce with a little careful brush painting. Interviews with the men who flew these planes and their recollections of the markings on their planes is especially useful when determining the actual paint colors used—very useful considering his reference photos are in black and white. This brings me to the most interesting chapter in the book.

Chapter five covers grey-scale color interpretation of the black and white images of this era. Photos made during WWI were taken using orthochromatic film, not the panchromatic films still in use today. Simply put, ortho film captured certain colors in black and white tones differently than we are used to seeing today. For example, reds were darker and blues were both lighter and darker in WWI photos, depending on a number of factors. The author takes the reader on a deep dive into the various ways researchers use to determine the “real” color of aircraft…as best they can. This chapter alone could make a very interesting book about how modern-day researchers interpret photos and other information to figure out the colors and markings of these iconic WWI German fighter aircraft.

This book is perfect for anyone wanting to learn more about the markings and colors of a variety of WWI Jasta aircraft. I found myself reading though a bit at a time to add to my knowledge of what it was like to fly a biplane for the Kaiser. I enjoyed reading this book and found it to be an indispensable addition to my WWI aircraft research library.

I think this title will be very popular with Great War aircraft enthusiasts and, given that we now seem to be in a golden age for WWI aircraft kits, should be a on a “must have” list for anyone interested in learning more about these pilots and the distinctive markings on their flying machines.

I can’t wait for volume two. Thanks to Jack Herris at Aeronaut Books for the review copy.

Hi ,I am aviation modeler and airline pilot . I am looking for any  information concerning  ace pilot Garsztka Fokker DVII from Jasta 31 . I would be gratefull for any information.
Best regards