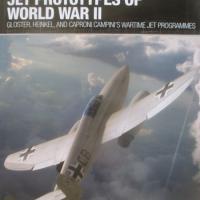 There were numerous experiments involving jet propulsion for aircraft just prior to the outbreak of World War II, with Germany, Britain, and Italy leading the way. The United States, the Soviet Union, and Japan were somewhat late in starting, but by the end of the war, only the Russians and the Japanese had failed to fly a jet powered prototype, and Germany, Britain, and the United States had begun to produce actual jet fighters, with Germany and Britain in the lead.

This text, the second in the series by Osprey, covers the Gloster, Heinkel, and Caproni prototypes. Osprey’s previous book, X-Planes, Luftwaffe Emergency Fighters, covers most of the Luftwaffe developments, although none of these types reached actual production.

Obviously, the major problem was the development of a jet engine powerful enough to achieve performance exceeding that of the propeller driven fighter plane. Sir Frank Whittle was instrumental in getting the British started. His engine, using a turbine, was powerful enough to be installed in a small prototype airplane, produced by Gloster, who later developed the Meteor jet fighter. A German, Hans Joachim Pabst von Ohain, got the Germans started. One of the big problems faced by all of the early engineers was securing enough financial and technical assistance to pay for the expensive costs of developing these engines. In addition, it was helpful to have the cooperation of the governments involved, and also of the aircraft companies who would design and build the airframes. The involvement of political authorities was absolutely essential. Early engines, while producing some power, were not necessarily adaptable to being installed in an airplane, so considerable redesign was necessary before they could actually power an airplane.

In Germany, Ernst Heinkel produced the first successful jet airplane, the HE-178. This project was conducted in absolute secrecy, and although the test flights were visible to residents who lived near the airports, apparently not much information got out to other countries’ intelligence organizations, although both sides did seem to have some idea about what the other side was doing.

The Italians approached the problem from a different direction. From the start, Campini developed his engines and sought publicity from the beginning. Although his engines never did produce enough power to create a really high performance airplane, the Caproni-Campini C.2 monoplane was flown in public, and a flight from Milan to Rome in 1941 was highly publicized. It flew successfully, but never achieved a performance that made it useful as a military aircraft.

The book outlines the development of three projects, including Gloster’s E.28/39, Heinkel’s HE-178 and HE-280, and the Caproni-Campini C.2. The author goes through the process of engine design and development, and the process of turning the revolutionary ideas into functioning hardware. The Gloster project, of course, was developed into the highly successful line of Meteor jet fighters, which were used during the war mainly against the German V-1 flying bombs. The Heinkel projects, beset with problems of competition between the Heinkel Hes 3B and He 8 turbojets and the BMW 003 and Junkers Jumo 004 engines, were flown successfully, but Messerschmitt and Heinkel developed other aircraft as combat types.

The book deals mainly with prototype development, as other sources have told the story of the production aircraft many times, and even Osprey’s earlier book, Luftwaffe Emergency Fighters, #4, covers the story of the German projects that evolved into the HE-162 and ME-262 jet fighters. Another Osprey title traces the HE-162’s development.

This book contains a wealth of information, including line drawings, color plates, photographs, and other information which is very useful to modelers as well as those just interested in the history. Since there are kits of all of these aircraft, at least in 1/72 scale, any modeler interested in this time period would be remiss not to obtain a copy of the book, since it is relatively inexpensive. Osprey has provided the modeler with pictures of the people involved, the aircraft, and the engines, but no cockpit interiors, as these were probably never photographed. The photos and drawings will be very useful in modeling these aircraft.

This book, and the preceding issue, Luftwaffe Emergency Fighters, will be essential for any serious modeler who intends to build these types. Don’t miss out on this one. Highly recommended.

Thanks to Osprey Publications, Phil Peterson, and John Noack for the review copy.