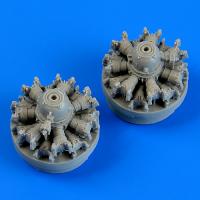 Quickboost is known for producing high quality, molded resin replacement parts for many model kits from most manufacturers. The current Airfix kits are produced from new molds, and are exceptionally well molded and nicely detailed on their own. However, with the limitations inherent in the injection molding process, some parts can be improved with resin parts, which can be molded with a greater level of detail and accuracy. Quickboost now offers a set of resin replacement engines for the Airfix C-47 Skytrain kit. The kit engines are three separate plastic parts, including the front and rear cylinder banks and the gear case (the propeller shaft is also a separate part, which fits inside the gear case). The Quickboost resin replacements are molded as one piece, with cylinder banks and gear case all together. While the cylinders are smooth on the kit part, the Quickboost replacement engines are more accurate with finely molded fins on the cylinders. There are no written or illustrated instructions included.

While most Quickboost products are “drop in” replacement parts, it is important to note that these are NOT. The least amount of work would involve drilling for the propeller shaft, which would likely need to be replaced with plastic or brass rod. The kit engines are designed to be attached to a raised mounting, with the center “T-shaped” boss fitting into a corresponding cavity on the back of the rear cylinder bank. The Quickboost parts, being molded solid, have a large pour stub which will need to be removed. The flange just behind the engine almost appears to be a mounting of some sort, with notches on opposite sides, but it is also flush with the outside of the cylinders and could possibly interfere with the fit of the cowls. It appears that the best method would be to sand the resin pour stub and mount all the way to the back of the cylinders, measure the location of the kit engines and sand off the appropriate portion of the kit mount to establish the proper distance from the firewall. Once this is done, drilling a center hole in the mount and the rear of the resin engine would allow the modeler to mount the engine with a plastic or brass “pin”. An additional photograph is included to illustrate the engines and the nacelle mounting.

With their outstanding quality and detail, there is no doubt that the Quickboost 1/72 C-47 Skytrain Engines would greatly increase the appearance of the finished model. Painted and weathered, the engines will add accuracy and authenticity to an otherwise somewhat bland area of the model. Additionally, these engines would likely work just as well for both the current release Airfix 1/72 Douglas Dakota Mk. IV kit #A08015 and the upcoming release Airfix 1/72 Douglas Dakota Mk. III with Willys Jeep kit #A09008.

Considering the complexity of installation, these parts are likely more targeted, and more recommended, for experienced modelers rather than novices. Overall, based on the quality and appearance of the Quickboost engines, I would have to say they are Highly Recommended.

Thank you to Aires and Quickboost for supplying this review sample.