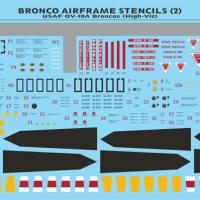 AoA (Angle of Attack) decals: New on the block, and focusing on Marine Air … We sincerely appreciate this new decal manufacturer sending IPMS/USA their latest releases for review! (…and the usual sincere appreciation also to IPMS USA Reviewer corps leadership for sending these my way.. )

This sheet is a comprehensive delivery providing stencil markings for USAF OV-10A’s; from their website, here’s what is on the sheet:

About the decals, i.e. the real subject of this review. They performed great; as on the Marine bird, no silvering, settled right in, and maintained strength even when being handled. The walkway decal in particular was (again) a test, as it was several inches long, did not tear, and moved about over a water bath on top of the wing. The fuel dots included the center tank, which was missing from the kit, and grounding stencils were readable.

The remaining stenciling was also readable under a magnifier, and in register. The density of the color was spot on; I used the remainder of my previous review of the OV10 decal sheet for Danang War Horses (32008)… the blues on the crew stencil block were not “bleed-through” thin as other decal manufacturers, and the subtle differences in the white stencil wording were notable. Also, I really liked the sharkmouth decal for the front of the aircraft.

Before I go, here are a few notes on a second build of this kit; the first experiment was great, but this was more of what I wanted to do… Lessons learned resulted in the following:

On this kit, I used several other aftermarket items: Resin wheels and tires and improved ejection seats from AMS. All were primed and painted, and the AoA decals for the seat markings worked flawlessly, even though they were applied over the seat harnesses. They settled in with a bit of solvent, and I painted over the belts when complete… the seat manufacturer and warning decals add much interest to the seats themselves.

Construction details to improve the mood of the builder:

The remainder of the kit assembly was pretty standard… Testors Modelmaster Aircraft Gray for the airframe, and flat white primer with gloss white overcoat for the upper wing. Glosscoat overall, apply decals, then glosscoat again… Weather if you like…

Back to AoA decals: All in all, a great effort… 10 of 10 for subject and performance, well done AoA! I fully expect we will see more from this company… they have set the bar far above the competition.