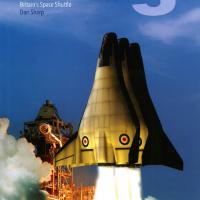 Dan Sharp studied history at the University of Liverpool and has worked as a writer and editor since 1998. As a hobby he began doing primary source research that has resulted in quite a few historical aviation books. These include Cold War – Sex, Spies and Nuclear Missiles (2013), Messerschmitt Me 262: Secret Projects and Experimental Prototypes (2013), Messerschmitt Bf 109: Secret Projects and Experimental Prototypes (2013), Dueling Above the Trenches – Sopwith Aircraft of the Great War (2014), D-Day Operation Overlord and the Battle for Normandy (2014), Luftwaffe Secret Jets of the Third Reich (2015), Spitfires Over Berlin (2015), The Hated Volksjäger: Histories of the Heinkel He 162 (2015), and Luftwaffe – Secret Bombers of the Third Reich (2016). Dan Sharp currently lives in Nottinghamshire with his wife and two children.

This book covers the story of the British Aircraft Corporation’s Mustard (Multi-Unit Space Transport and Recover Device). Dan Sharp starts with the ending of World War II with the English Electric’s efforts towards high speed aircraft designs. These efforts led into the English Electric P.42 proposal that is covered in Chapters Two and Three that encompassed more than one hundred proposals. This effort focused on designing hypersonic vehicles (Mach 5 plus) in a variety of roles: long range cruise missile, space vehicle launcher, boost glide vehicle, and space plane. Chapter Four covers US proposals that influenced the British design like the Boeing X-20 Dyna-Soar. A shift in strategy by the Royal Aircraft Establishment led to the goal of a vertically launched spacecraft to launch into orbit. This decision led to English Electric focusing in on the Mustard concept, a rocket launched system with re-usable boosters. Chapter Seven delves into competing designs from Hawker Siddeley, Bristol Siddeley, and other European proposals. Dan Sharp wraps up with Chapter Nine, recapping the Mustard design and ending with the death of the project. All of this basically was accomplished primarily from 1963 to 1966 shrouded in secrecy and some six years ahead of America’s Space Shuttle program.

It’s really hard to identify a favorite chapter or section of this book. Even though I considered myself to be fairly knowledgeable about the US Space program, much of this book was new for me. I found the section on the proposed Hawker manned satellite killer to be quite intriguing. There were two designs, a single engine proposal and a twin engine proposal. The single engine design’s profile was to reach Mach 5 at an altitude of 84,500 feet. There is would have nearly nine minutes to fire missiles on an enemy satellite. The down side was that despite using drop tanks, fuel volume was a critical issue. The thin engine proposal was to fly at Mach 5 for at least 21 minutes using kerosene. An option included using kerosene drop tanks with the main fuel tanks holding a mix of kerosene and pentaborane fuel that would extend a Mach 5 speed to 49 minutes. Pentaborane was a a ‘fun’ fuel. It was considered by the Americans, Soviets, and the British, but was ultimately rejected on safety reasons. I essentially exploded on contact with air, burning a green flame, and its exhaust fumes were toxic. Design studies were done to move the top speed to Mach 6 with a tantalum alloy but it would have required the development of new airframe coatings.

I really appreciated Dan Sharp’s book as it was truly eye opening to Britain’s endeavors in the race towards a Space Shuttle. This is mainly as a result of his access to archival drawings and photographs, along with interviews with design team members. This is an impressively detailed tome of this top secret effort to reach space.