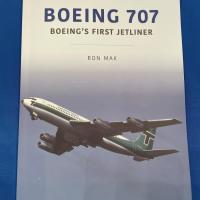 The Boeing 707 was the first widely used commercial jet. It brought the US into the “jet age” in the late 1950’s. The 707 remained in production until late 1978, by which time other more economical and larger designs were needed due to increased passenger amounts over longer routes. This book is a tribute to a wide range of 707 variants, and airline liveries.

The soft cover book is a rather compact size containing 180 pictures over 96 pages. Most pictures are a little muted and dark, but still show to good effect, the individual aircraft in its full paint scheme and colors.

As a child, I was fortunate to have flown on a number of the airlines in these pages and brought back memories of being able to visit the cockpit, helping to develop my love of aviation. I still have my BOAC Junior Jet Club wings and logbook given to me on a flight. I have a Boeing 707 trip logged in it, signed by the captain, as well as an entry flying on a VC-10. Exciting times!

Through the pages of this Key Publishing book, each picture shows a specific aircraft along with text detailing its operation with the airline pictured, plus who operated it after that and what became of it. Most were regrettably scrapped, however, some went on to static displays in museums, while others were converted into military aircraft.

I thoroughly enjoyed reading this book and look forward to exploring more books from Key Books.

I would like to thank Casemates and Key Publishing, as well as the folks at IPMS USA for the opportunity to review this lovely book.