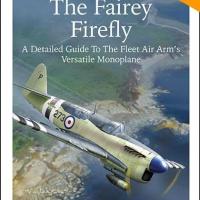 The Fairey Firefly was originally conceived in the late thirties as a carrier based fighter for the Royal Navy. It was built as a two seater because the authorities felt that a single pilot would not be able to navigate and fly under combat conditions at sea. While other similar aircraft, notably the Defiant and Blackburn Skua and Roc had power operated turrets, the Firefly dispensed with these, and throughout the protracted development of the type, the rear gun was never adopted for widespread use. Performance, however, was exceptional, and the type was ready for limited service in 1942. Development was slow, and it never really made the grade as a carrier based fighter, although many variants were developed for specialized uses, including night fighter, target tug, attack bomber, and trainer. Postwar, the type continued in service well into the fifties, being modified for various specialized roles, and the Royal Navy used the type during the Korean War. In addition to the Royal Navy, the types was used by the Australians, Canadians, Danes, Ethiopians, Indians, Dutch, Swedes, and Thais. A few are probably still flying in private ownership as warbirds. I wouldn’t be surprised to see one at the EAA Fly-In at Oshkosh one of these days.

This book is intended to provide the modeler and aviation historian with a complete account of the development d service use of the Royal Navy’s Fairey Firefly carrier based fighter. It begins with a detailed account of the early development of the type at the beginning stages of World War II, and describes the evolution of each mark in great detail. Development was slow during the war, and although a substantial number were used for various combat operations during the war, the type never became a major combat type for the Royal Navy. However, the type proved to be a highly reliable aircraft, and aside from, two seat fighter and attack duties, some were used as night fighters. Postwar the type was exported to numerous countries, and used until the early fifties by somenations’ air forces.

The book is very well organized, and begins with an introduction, a narrative history of the development and the type in British and foreign use, a section of technical description showing construction and equipment carried, both in description and using excellent black and white line drawings, a section of the evolution of the type, describing prototypes, production models, and projects that were never completed or adopted. Another section provides information on the camouflage and markings used, and includes color and black and white profile drawings and excellent color photos. The selection of photos is amazing, and I suspect that since this plane continued in use after the war for such a long period of time, it was photographed by many amateur 616 photographers in Europe, many of which are included in the book, although unfortunately, none of the photos are credited to individual photographers. The last part deals with themodels available of the type, mainly in 1/48 and 1/72 scale. A detailed account of a 1/48 scale model project is presented by Steven Evans, while two Special Hobby 1/72 and 1/48 scale kits are described and built by Libor Jekl and John Wilkes. A list of kits follows, mentioning the Frog and Airfix kits, as well as the profusion of 1/72 scale kits that have recently appeared. In addition, a list of accessories and decals is provides, as well as a bibliography of sources of information on the type. However, newer modelers will find that this book would probably be adequate for providing information on all of the marks and nationalities that could be represented in models of this aircraft.

Aside from the excellent detail provided in the book, the photos and drawings are as good if not better than anything I’ve seen in this type of book. There is a good three view drawing of the type in 1/72 scale, and many drawings showing the different marks and how they were different from others. Also, the interior details are explained and illustrated very well, so that any modeler has an reference for any details her or she would like to add to a model.

This is an exceptional book, and I would highly recommend it to anyone interested in the aircraft. The price is certainly reasonable, and the quality is outstanding. Don’t miss out on this one. I hope this author continues on and does more books of this type. Buy it. Thanks to Valiant Wings, and Phil Peterson and Bill O’Malley of IPMS for the opportunity to review this outstanding publication.