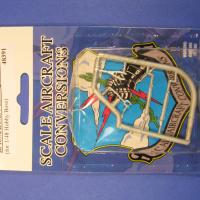 Scale Aircraft Conversions specializes in white metal replacement parts. Its line of replacement landing gear has been expanded to include a set for the Bf-109 A/B/C/D/V from Arsenal Model Group (note the boxing says “for Hobbyboss” but that likely is an error)

The set is including a total 4 parts covering the main landing gear struts and tail fork (two types of tail forks are offered). These parts are drop-in replacements for the plastic parts.

Considering that the Bf-109 is a modest size model - in 1/48 - I don’t think the reason to get a metal landing gear is due to the weight (unless you add a lot of resin to it) but rather the reason to get the set might be to be able to ‘tweak’ the landing gear strut for an improved alignment of the parts to achieve a proper stance, which is quite tricky on a Bf-109,

You can see from the pictures the parts are very cleanly molded and formed, with no visible molding lines.