The Battleship Bismarck (Anatomy of the Ship) 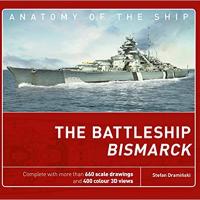 “Sink the Bismarck” was the very first war movie I ever saw as a young lad, with my Scottish Father telling me it involved “the greatest naval engagement undertaken by the Royal Navy in the Second World War”. The Bismarck, one of two Bismarck-class battleships laid down by Nazi Germany’s Kriegsmarine prior to the outbreak of the Second World War, was fast and extremely powerful, armaments wise. She had a very short career, undertaking only one offensive operation, in May 1941, codenamed Rheinübung. Together with the heavy cruiser Prinz Eugen, Bismarck sailed into the Atlantic on a mission to block shipping carrying supplies to Britain. Obviously, this was something the British were determined to stop, and so the Royal Navy sent forces to try and intercept the German ships, including the battleship HMS Prince of Wales, and the battlecruiser HMS Hood. On the 24th of May, at what became known as the Battle of the Denmark Straight, HMS Hood was hit by shells from Bismarck, one of which led to a horrific magazine explosion. Hood sank within 3 minutes of the explosion with the loss of over 1,400 crewmen, having only 3 survivors. The British Prime Minister and former First Lord Admiral of the Royal Navy, Winston Churchill, took the loss of the Hood personally, and launched a relentless search and destroy mission against Bismarck. Together with Royal Navy capital ships and torpedo bombers from the aircraft carrier HMS Ark Royal, Bismarck was hunted down and heavily damaged. She was eventually scuttled by her crew and sank on May 27th 1941 with heavy loss of life.

On the hobby front, modelers have been well served for kits of the Bismarck. At the micro end, there have been 1/2000th scale kits by the likes of Heller and more recently Flyhawk. In the two most popular warship scales there has been an avalanche of releases. In 1/700th scale Aoshima, Dragon Models, Flyhawk, Matchbox, Meng, Pit-Road and Trumpeter are among the most well-known firms to release kits, while in 1/350th there are kits from among others Academy Models, Lindberg, Revell and Tamiya. But there are many other kits in multiple scales from yet other manufacturers! For those wishing to add detail to their model of the Bismarck, one can go no further than this tour de force book by Osprey Publishing, the second in their “Anatomy of the Ship” series, a line of naval books initially launched back in the early 1990’s by Conway Maritime Press in the UK.

The Conway Press books (also published under the Naval Institute Press label in the USA) came packed to the gills with around 250 pages of superb black and white drawings covering each ship under discussion from bow to stern and hull bottom to the tips of the tallest masts. They were nothing short of brilliant. The two recently published books by Osprey Publishing (the other being “Battleships Yamato and Musashi”) are ever BETTER, IMHO, as all the great black and white drawings are now supplemented with full color 3D views of the various sections of the ship! In fact, the Bismarck book is listed as having 660 scale drawings and 400 color 3D views, on 330 pages measuring 10” x 9.5”. The paper quality is excellent.

The Bismarck book is divided up as follows:

Introduction: a one-page introduction to the book by the author.

History: a 20-page written history of the Bismarck starting with the date Blohm & Voss shipyard was awarded the contract to build her to the hour she sank. Each important date in her short life is listed, together with a description of what transpired on each day, down to covering her last few days almost hour to hour. The text is supplemented by a few nicely chosen period photos, together with a full-page color map depicting her movements during Operation Rheinubung.

If you have any interest in the battleship Bismarck and modeling it in any of the multitude of scales available, then I would say this would be an excellent book to consult during your build. If you plan on super detailing one of the larger kits, such as 1/350th or 1/200th, then this book must be listed as “essential/must have”. I can’t think of any detail you might wish to add to your model that isn’t covered in this publication. I hope that by looking at the various photographs provided in this review, the reader will be able to see just how super detailed this book is. Run out and buy this book!

My thanks to Osprey Publishing for allowing me the privilege of reviewing this awesome book on behalf of the IPMS USA membership.