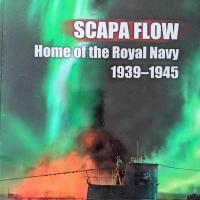 This volume is from MMP’s Maritime Series and is a comprehensive description and history of the Royal Navy’s base in the Orkney Islands at the Northern tip of Great Britain during WW II, Skapa Flow. It starts with a complete geographic description and a brief pre-WW II history of the base and then goes into a step-by-step description of the base’s development, facilities and defenses, including several maps of the locations of anti-aircraft defenses, mine fields and, anti-submarine barriers I am sure Germany would have liked to get a hold of. There are chapters dealing with the antiaircraft defenses, coastal artillery and barrage balloons, the RAF’s presence, minefields and wrecks, and everyday operations as well as the eventual fate of the base at the end of the war. There is even one chapter that details U-47’s raid under Gunter Prien into the harbor that sank the battleship HMS Royal Oak.

There are many photos of ships that were stationed there and equipment that was used. They are all in black and white and most are crisp and clear. Along with the afore mentioned maps, at the end are eight pages of line drawings of some of the artillery emplaced there as well as the HMS Nelson, Rodney, Queen Elizabeth, Royal Oak and Ark Royal.

This is a very good resource on this important Royal Navy base and gives the reader a complete picture of the base’s history, resources and the reasons why things were done the way they were. I recommend it to those interested in the Royal Navy, WW II buffs or general naval history.

I want to thank Casemate Books for providing the review copy and IPMS/USA for the chance to see this excellent resource.