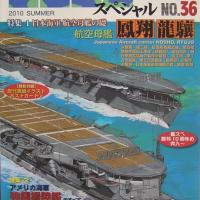 ModelArt special subject magazines are really softbound reference books on a particular subject. ModelArt Summer 2010 No. 36 is entirely devoted to ships, so armor, aircraft and care buffs need not apply. In No. 36, the early, non-Akagi and non-Kaga aircraft carriers of the Imperial Japanese Navy are the topics – Hosho and Ryujo. You also get an update on US Navy amphibious warfare model kits and as-built Hiryu and Soryu kit modifications as bonuses. This issue

Hosho and Ryujo represented the first carriers built as such for the Imperial Japanese Navy (Akagi and Kaga were converted from battlecruiser and battleship hulls). Each was small and had its own problems that limited wartime use. Hosho survived WW2 but Ryujo was an early casualty at the Battle of the Eastern Solomon’s in 1942. Pages 6-62 detail the various guises of each carrier with photographs and excellent builds of existing 1/700 scale kits of each appearance of each carrier. Hosho went through four significant changes from 1924-1944, while Ryujo went through three changes from 1933-1942. Each time period is depicted, and modifications of existing kits are detailed in pictures and text (entirely in Japanese). The pictures give enough information to enable moderate-advanced modelers to make the necessary changes to existing kits. Photographs, line drawings and pictures of models building and finished are sufficient to figure out how to modify kits to earlier or later configurations. No information on aircraft carried is presented. If you wanted to build any versions of these carriers, this book is an indispensable reference.

Pages 63-103 depict the various post-WW 2 US Navy carriers/amphibians starting with the Essex-class conversions (Dragon Models USS Boxer) to the Iwo Jima helicopter carrier class to the large-deck amphibians of the Tarawa and recent Wasp class. Amphibious command ships (Blue Ridge) are also covered. The articles concern 1/700 and the new 1/350 USS Wasp LHD-1 kits with many pictures of finished models.

Pages 104-111 are a pictorial review of the Year 2600 (about 1900) IJN ships of all classes. Pages 112-117 depict Hiryu and Soryu in 1940 appearances from the existing 1/700 kits out of the box. After that you get a feature on the old 1/720 scale Revell USS Tarawa LHA-1 kit, followed by a 6-page review of naval activities in London, England right now. Pictures of museums and existing Royal Navy warships are in this section. The last 13 pages are devoted to ads of ship models.

Special editions like No. 36 are larger than the standard 7x10 inches size, and are close to 8x11 inches. As usual, printing and reproduction quality are excellent. Model Art text is entirely Japanese, and most about half the photos of models are in color. This issue is recommended if you want to know everything about the early, small IJN carriers Hosho and Ryujo (but were afraid to ask), and also some extra information on Hiryu and Soryu, often-neglected 1950-1960s US Navy amphibians and modern US Navy amphibian kits.

Thanks to DragonModels USA for the review copy

IJN Hosho in as built 1924 appearance

IJN Ryujo in 1935 post-refit appearance before the bow was heightened after hurricane damage in 1935. Notice the biplane aircraft

USS Boxer LPH-4 from the new Dragon Models 1/700 kit. 1950s appearance of an ex-Essex class carrier converted to an amphibian ship before purpose-designed ships were built. Boxer ferried helicopters and aircraft to Vietnam and participated in several amphibious operations in the 1960's
Previous Next