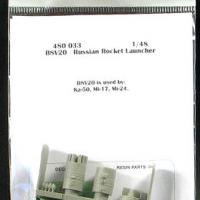 Guided rockets are nice when you need to place some hurt on a specific spot, but when the need is an overwhelming amount of firepower in a small area, nothing beats the classic unguided rocket. Most nations still have podded unguided rockets in their inventory, including the US and the former Eastern Bloc, as they are cheap and effective. The B8V20 is a podded launcher that holds 20 80mm S-8 Series rockets. They are commonly found on attack helicopters such as the Mi-25 Hind, Mi-28, and Ka-50 Hokum, but also have been fitted to the Mi-8 Hip and others. Other variants of the pod include more aerodynamic shaping with a cone on the front.

The hanging bag with enclosed card backing comes with two resin pour stubs, each with all the parts for one complete pod, giving two pods total in the bag. Casting is perfect, with crisp detail as we would expect from anything done by Aires. The pod comes in two halves, which is obviously done to maximize the detail on each end. All the appropriate mounting lugs and rings are included in the casting, making this a very detailed item. The very thin blast shroud is cast separately and can be added to the end of the pod if you so desire. Twenty rocket tips for each pod are also included if you wish to load your pod, though be aware you will also need to fill the rear with some plugs of plastic rod to replicate the aft end of each rocket. To top it off, a small decal sheet of stencils is also included.

Building the pod is fairly straightforward. Take your time cutting the parts free from the resin stub, as the cleaner the cut, the less cleanup and thus more square your joining end will be. Since the pour gate is inside the outer diameter of the pod, I cut as close to the pod as I could, then took a scalloped edge blade and scooped out the remaining resin on each end of the pod, being sure not to touch the circumference. This gave me a very clean, square edge to work with when joining the two halves. Be sure to line them up perfectly, sighting down the top where the mounting lugs are. Unfortunately, some probable flexing in the mold took the pod halves ever so slightly out of round, so the join isn’t perfect. It’s not bad, though, and a little putty followed by a file and sandpaper eliminated the visible join fairly quickly. I imagine that each casting will be different in this regard.

The blast shroud is very thin, and I carefully cut it free using very light pressure on my UMM saw. I have yet to decide my final configuration, so the shroud was left off until later. I also did not attempt to load my pod with the rocket tips, but with Aerobonus only providing 20, there are no extras! I’m thinking a small dab of blu-tack in some tweezers may work well to hold and position these in place.

The only kit I had on hand is the one I plan on using them on, the venerable Revell/Monogram Mi-25 Hind D. No shock here, the Aerobonus far surpasses what the plastic provided, not only in detail, but in accurate scale as well.

This is no doubt another winner by our friends at Aires within the Aerobonus line. Not only is this another affordable, highly detailed, and accurate replacement for ordnance, but provides another item of Soviet weaponry that has been lacking in scale. My thanks to Aires for the review sample and IPMS-USA for the review space, and please keep these kinds of sets coming!

Comparison with kit part
Previous Next