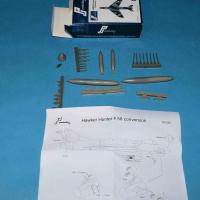 One of the latest conversions from PJ Productions in Belgium is the set to convert the Airfix 1/48th Hawker Hunter F.6 to a F.58 which is the export version for Switzerland. A total of 88 were built and 12 converted for an even 100 airframes. Changes addressed by this conversion include a new nose to the aircraft, under wing rocket option, Side blister under the cockpit, change to tail fairing, fuel tanks and various antennas. All this comes from 34 resin parts which are very well cast. There are no decals for the markings and those will need supplied elsewhere.

The parts prep is simple, remove the casting blocks and wash to eliminate mold release. Conversion can start with the nose which is a direct replacement. You will need to drill out the gun holes and add the cannons but the directions are clear on placement. The next direct replacement are the blisters on the side directly in front of the wings,. These are trimmed and added directly and even have an alignment tab so fit should be quick and easy. Under the wings, there is a fairing added 8mm from each wing tip and this is clearly given exact location so it should be a quick sand and glue to get this attached. The tail fairing will need sawed off after the fuselage is together and cuts on a panel line and has a plug to help fit nicely. The new under wing tanks need minimal clean up. You have to add the two tails which are shown clearly in the directions and then can be added to the kit pylon. There is one under belly antennae to add and it is also clearly located.

The wing pylon/rocket assembly is the fiddliest. First, my set had one broken rocket which is easily glued and sanded to place. After washing and drying, you build each rocket mount from three parts. The base part has two pylons and you glue two more onto that watching to get the angles correct. There will support your rockets. I would then glue the rocket mount to the new pylons and that to the fuselage and then add the rockets later. There are no painting instructions but reference photos are easily available.

All in all, this is a simple conversion to a Swiss jet that was used for many years. I would recommend a little experience with resin as some of the parts are very fine and small but nothing too difficult. Recommended for all who want the Swiss version of this beautiful plane.

My thanks to PJ Productions for the opportunity to review this conversion.

Drop Tanks and Side Blisters