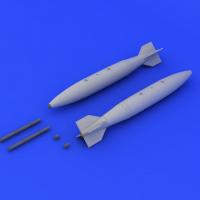 This set is scaled down version of Eduard’s 1/48 Brassin Mk. 84 2,000 lb. bomb set. As with the 1/48th set, this set includes two bomb bodies with standard low drag fins for normal drops, and three options for the nose – a fuse extender, a standard fuse or a nose cap, and a small photo-etch brass ring for the tail.

As with most US bombs, painting is easy – olive drab overall with a little silver or steel for the fuse. An option not noted in the instructions would be to paint the bomb blue to represent a cement filled training bomb. I left the fuses off until painting was complete so as not to knock them off. I sealed the paint with a nice coat of Future to prepare the bombs for decaling.

The set includes a comprehensive set of decals with yellow stencils for the olive drab live weapons and black stencils presumably for the blue practice bomb as black stencils disappear on an olive drab bomb. The set includes yellow nose bands, but I applied them further forward that I did the 1/48th set and was able to get them to go all the way around the bomb and meet without have to use part of the extra decal. I used Micro Set and Micro Sol in applying the decals and they settled down very well conforming to the shape of the bomb and its details.

I elected to install the fuse extenders as I have several Vietnam era aircraft under construction that they will look nice on. The attached easily with superglue but check your alignment carefully as it is easy to get them on a little crooked and not notice it until too late. I have one that is off a bit and points upward slightly instead of straight ahead.

This is a great set and by virtue of the different fuse options can be used on many different aircraft. Highly recommended.