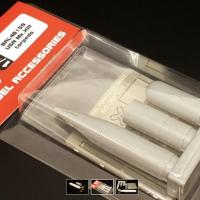 The US Navy’s most common aerial torpedo used in WWII was the first purpose built torpedo for use in aircraft (but they were also used on PT boats. Brengun’s kit comes with twelve photoetch parts and three resin parts. The kit comes with two options- the early configuration which is a standard looking torpedo and was used from 1935 until 1942. The second option was a later configuration with breakaway plywood nose (often called the pickle barrel) and plywood tail used from 1942 until 1951. I opted for the late version for variety.

First thing was to cut the tail and correct nose of square. These are glued together, puttied with glazing putty, and smoothed with lacquer thinner. Next, the two tail parts are cut off – make sure you don’t lose them. Cut off the two propellers add five, then the first cut off ring, then prop part 6, and the last part. Next the fins are added. Note that there are two different fin parts - 3 & 4. The metal brace can also be added to the front.

Separately, the four PE pieces for the tail box are assembled. Make sure the bends point towards the outside. Once assembled, I primed the kit and set aside to dry. The back was painted brass, the war head light gull gray (don’t forget the front inside the plywood). The wood parts were painted Tamiya buff. Then using a liner, wood grain was added with Tamiya wood brown. I mixed Tamiya green and red clear to get a transparent brown and misted it over the wood parts. I added a black wash, a final flat coat and the box is added to the back.

This is a neat kit and would look great in a TBM or SBD maybe. Assembly is easy and it painted up well. Definitely recommended.

My thanks to Brengun for the review sample.