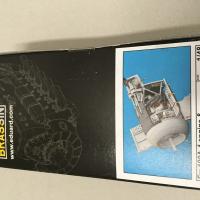 IPMS/USA thanks the Eduard team up front for sending us this absolutely stunning set for the new Eduard FW-190 series. I received this set when difficulty was experienced by another reviewer having some issues out of his control in getting the sets reviewed, so I volunteered and got “The lot”. Hooo boy…

Another note: right after I got the sets, I had work and a funeral interfere with MY life, so these took some time to get done; particularly since I was working out of a hotel (as I am now again on OTHER review items) so I’m a bit behind.

First off, Eduard has produced some of the best sets, bar none, for the FW-190. In this review I used both the engine sets and the upper gun deck sets; here are my observations.

First, the sets fit great. I had a few difficulties with figuring out what went where, but was able to overcome and get them installed. The upper MG’s in particular need care in installation, or you can really have them out of whack.

You as the builder need to take serious care in what goes where. I had to disassemble a couple of parts when I superglued them in the wrong place, so be aware. The exhausts need to have the kit ready to have the engine installed so you can put them in the correct place.

I also recommend use of a magnifier… the miniscule nature of some of the PE sets makes this mandatory. There are braces that fit between the cylinder heads requiring tweezers; same for the engine ignition wiring.

I did not install the cowl parts, but as you can see on their website, Eduard has set up a great opportunity to have a true maintenance diorama with everything open. The detail on the interior of the cowl is more than impressive, and there are PE latches to indicate open cowl positions.

All in all these sets are worth acquiring if you like your aircraft open. I highly recommend them and they get full marks for excellence in presentation and assembly. Much easier than past sets from other manufacturers! 10 of 10…

Thanks again to the Eduard crew for working with us at IPMS USA!