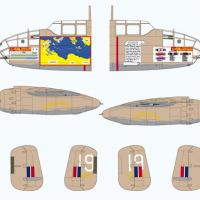 I started by reading through the information provided by Lifelike with this decal set. They cited no less than eleven sources of photographs used as their reference. Two of the references are color photographs. As I didn’t have any of their sources in my tiny book collection, I resorted to searching the internet for photos.

I was able to find a few decent photos of the Desert Warrior. She was flown by Ralph Lower on an impressive 52 missions in North Africa before he and his B-25 were sent home to participate in a War Bond Tour. This probably explains the number of photos of this particular B-25. The sad news was that I learned of Ralph’s story from his local newspaper announcing that he had passed away earlier this month at the age of 99. Ralph’s story. (You may need to create an account on the Everett Herald website to view the article.) After reviewing a few of the photos it was clear there are some accuracy issues with the Airfix decals.

Starting with a very good starboard side photo, I noticed the first three tail number clearly visible on the fin. The kit decals only provide the last 3 numbers. In the same photo you can clearly see the script word Earthquakers painted on the nacelle. Again, this decal was not provided in the kit. Unfortunately, none of the port side photos confirm the presence of the Earthquakers on its nacelle. Lifelike does provide a second Earthquakers decals in case you want to attach one to each nacelle. Lastly, the starboard red propeller warning stripe is clearly visible on the aircraft while the decal was not included in the Airfix kit.

Moving on to the port side, the first obvious issue with the kit decals are the colors of the nose art map. Even in black-white you can tell the land area of the map are a much lighter shade than the water area. (The use of orthographic B-W film would NOT explain this type tonal deviation.) I can assume the color images confirm the correct-ish color for the land area. The kit decal has this area of the map green while Lifelike represents it as yellow. That makes sense to me as much of the North coast of Afrika is well… desert. The other color changes made by Lifelike include the bomb mission marker colors, as well as the Arabic text background color. Again, I’ll have to rely on their research as I don’t have access to those two-color photos.

The final changes are with reference to the British style fin flashes. Using basic direct scaling they have worked out the fin flashes are slightly larger than the ones provided on the kit decals. The Lifelike update set provides the larger fin flashes as well as an additional set for the inside of the fins. What’s this… the inside surface of the fins??? After watching some color footage of the 12th Bomb Group I found on Youtube, I noticed many (but NOT all) of the B-25’s carried a duplicate set of fin flashes on both the inner surface of the fins. Lifelike points out it was normal to apply the fin flash to both the inner and out surface but the Youtube video clearly shows several aircraft without the inner fin flash. So, this one may be up to the builder to decide how to handle the decal application.

I have to say I am very happy Lifelike decals took on this little project. I’m planning on using this update sheet when I build the model this winter. I should probably point out that the sheet from Lifelike only contains the decals that need to be used in place of the kit decals. For the remainder of the decals such as national markings, stencils etc. you will still need to utilize the kit decals.

I would really like to extend my thanks to Lifelike Decals for making this sheet available for review as well as to the IPMS USA review team for giving me the opportunity to review the decals.