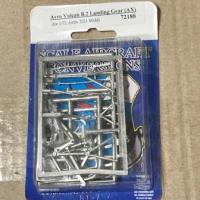 Here we are with one more of SAC’s white metal replacement to improve the longevity of the models we slavishly spend so much time and cash on. In the case of the new-tool 2019 release Vulcan, it’s a LARGE model and the metal replacement is a good idea.

How do I know this? Wellllll, back in 1984, around May, I had purchased the then-new Airfix Vulcan in 1/72 scale as my first acquisition while stationed at RAF Mildenhall. I bought the kit at a housewares store on the high street. What a concept, model kits for sale EVERYWHERE back then it seems. I took a year to build it due to a lot of reasons, but in the end I had a great model. And the gear wheels and tires kept breaking off. Particularly when I moved and boxed up my built up kits.

I know this because I still have this same model baking in the garage, in it’s Xtracolor Grays and greens, and I noticed there were some missing bits over time, much of it the landing gear.

SAC solution time; to reiterate, the truck and axle assembly that holds eight total wheels per side tends to be where the missing parts were on my old (ish) model (ok, it’s coming up on 40, but who’s counting?). The SAC gear will ensure the gear on my “NEW” vulcan will retain the wheels and tires ‘cuz (rather than snapping off) the axles will just BEND.

This is also a good thing as far as keeping all the “toes” on the ground, because you can push them into position and they will tend to stay there.

This SAC gear set includes all the door actuator oleo struts that also are missing on the old version of the kit for the gear doors… but are included in the new one… a nice touch. This is particularly noticeable on the nose gear, with the follow up doors just “Hangin’”on the older version. Same for the mains…

I also noted you will need to pull out the SAC set early in the build, as they include one of the main struts that is installed in the main gear wells BEFORE you get around to closing up the wing. Anyone wants these two parts, let me know…

As usual I like the SAC gear for myriad reasons, and highly recommend the purchase of same. Your Vulcan will appreciate it.

Thanks again Ross and SAC!!!… We at the Reviewer corps appreciate your providing us these items!