The Auster in British Military and Foreign Air Arm Service 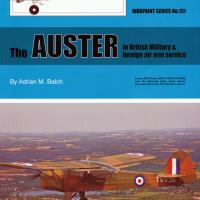 Auster Aircraft started in 1938 as Taylorcraft Aeroplanes (England) license building the eponymous US manufacturer’s light aircraft. During WWII, the company built over 1,600 high-wing Taylorcraft Auster air observation aircraft for the British armed forces, and in 1946, changed their name to Auster Aircraft. Based at Rearsby Aerodrome in Leicestershire, the company continued to develop incrementally the basic high-wing monoplane design, eventually building a total of over 3,800 aircraft for both military and civilian usage worldwide. Auster Aircraft was bought out by the new BEAGLE company in 1960.

The 131st work in the prodigious Warpaint series focuses on the Auster in military service worldwide but, as might be expected, the majority of the book concentrates on British service. Author Adrian Balch is a well-known writer and photographer and draws heavily on his own photo collection to help illustrate the story. His text is generally well written and authoritative, and details the development of the type, followed by an exploration of its service with numerous armed forces around the World. I particularly enjoyed the section on the Auster’s role in Antarctic exploration, where it was used by four different nations – anyone who has built the old Airfix 1/72 Auster Antarctic kit will remember the superb Roy Cross artwork! Colour profiles are included of each country’s Antarctic Austers, so a nice group of models could be produced.

As is usual with the Warpaint series, there are numerous full-colour profiles and 1/72 scale plans; there is also a short ‘In Detail’ photo section, though this would perhaps have benefited from having a few more interior shots. There is no modeling section, but as so few kits have been issued of the type this is not really a surprise. My one real niggle with the book is the poor editing, which is especially noticeable in the foreign users section.

Overall, a very nice package on a type that’s under-represented in print, so this is a welcome addition to the Warpaint series. Recommended.