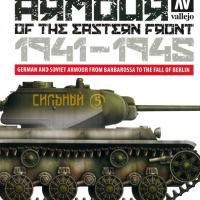 Guideline License Publications has unveiled a new series, Warpaint Armour. Instead of a monograph on a single aircraft, this series will contain a series of articles that focus on tanks and other armoured fighting vehicles that shaped pivotal moments in the history of modern warfare. Warpaint Armour will showcase articles by a team of experts utilizing the latest research. Each article features historical photographs along with color pics of museum displays or renovated AFVs from World War I to the current day. Each volume will feature eight focused articles and a modelling gallery, showcasing some of the finest models that have been seen in Miltary Modelcraft International over the last decade. Each article will also include specially commissioned color profiles in conjunction with Acrylicos Vallejo model paints.

David Grummitt is the editor of Military Modelcraft International with more than a decade of building models and writing articles for publication. As well as being editor of MMI since 2009, he is a professional historian who has written several books on fifteenth- and sixteenth-century military and political history. David is currently the Head of School of Humanities at Christ Church in Canterbury. Earlier he worked at the universities of Kent, Oxford, Cambridge and the London School of Economics and was for nearly ten years a senior research fellow at the History of Parliament Trust. At Kent, he was Faculty Director of Learning and Teaching for Humanities.

Guideline’s newest series is in their standard A4 format softbound publication that is 84 pages (including covers). I counted 136 clear black and white photographs, 82 color pictures, along with 60 color side profiles by three different illustrators. All the color side profiles include AV Vallejo paint references (including stock number references). There are also color graphs and black and white organizational charts. The Chapters include 4 articles on Russian AFVs and 4 articles on German AFVs:

I found all eight articles very engaging. Each article provided detailed text (several with first person accounts), detailed photographs, and color side profiles. Still, I found the article on “Strange Bugs” by Thomas Anderson to be quite enjoyable. Addressing the concept of German Light Tanks, this article focuses on the late-war Panzers, heavy armored, machine-gun carrier that emphasized mobility. The Panzer I Ausf. F filled this bill with two machine guns. A follow-up design, the Panzer II Ausf J carried a machine gun along with a 2cm gun. A third vehicle, the Panzer II Ausf. L had a higher emphasis on speed. In the end, the first two were not particularly successful, as the German experience with the Soviet T-34, proved to be a death knell for the concept. The Panzar II Ausf. L might have worked, but by that time the German manufacturing capabilities had been curtailed substantially.

I think this new series from Guideline License Publications has a lot of potential. While not on the same scale as Warpaint’s aircraft monographs, you do get some interesting articles from both sides of the battle that provides an intriguing perspective. Providing the color profiles along with the AV Vallejo paint citations makes this an excellent resource for modelers, but historians will enjoy this as well.

My thanks to Guideline License Publications and IPMS/USA for the chance to review this great monograph.