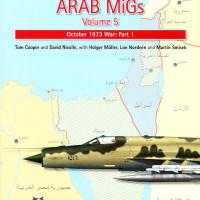 Dr. David Nicolle, born in London in 1944, is a military historian specialized in the history of the Middle Ages, specifically, the Middle East. Dr. Nicolle worked for BBC Arabic and earned a Ph.D. from the University of Edinburgh. A prolific writer on military historical topics, his interests include military aviation in the Arab and Islamic theatre. He was a history professor at Yarmouk University in Jordan from 1983 till 1987. Dr. Nicolle has been quite prolific with dozens of television documentaries and more than one hundred books and even has a Wikipedia page.

Holger Müller has previously authored a hard covered book on the MiG-21, published in 2012 through Motorbuch-Vertag. An aviation enthusiast, Holger Müller was born in 1968 and served in the East German Air Force as a MiG-21bis mechanic/technician with JG-8.

This is the fifth volume in the Arab MiGs series with a focus on the start of the October 1973 War. Starting off with an introduction, acknowledgements, and two pages of abbreviations, this volume then addresses seventeen pages of addenda / errata from the first four volumes of Arab MiGs. The addenda / errata adds a substantial amount of additional photographs and information that has come to light since the first four volumes were published, kicked off with a photo of Samir Aziz Mikhail in front of a MiG-17PF of No. 31 Squadron in 1963. Then we get into the meat of the beginnings of the first few days of the October 1973 War with five Chapters. I’m expecting that the remainder of the October 1973 War will be addressed in Arab MiGs Volume 6. I would note that each of these chapters comes complete with footnotes at the chapter’s end. Completing this volume are five appendices, a bibliography, and an index.

I continue to be amazed at the superlative effort presented by the authors. The authors have accessed never-before-seen data, stories, and photographs that enrich the storyline. This includes interviews and combat reports over the backdrop of the political turbulence exacerbated by the Cold War between the US and Russia. The authors acknowledge that such experiences are not necessarily accurate as the claims often can be inflated due to the heat of battle and don’t necessarily stand up to scrutiny once the opposing side’s story is included. Nevertheless, these first hand experiences put the reader inside the battle. This edition includes a bit more of interface with the Israeli side of the story to better analyze the conflicting claims of the October 1973 war. The authors contend that the IDF exaggerated the facts, but the sad truth is that with the continuing conflict in the region, especially in Syria, it may be some time before the record can be evaluated further. As it is, this book details the events that unfolded on October 6, 1973 when the Egyptian and Syrian Air Forces attacked Israeli positions on the Sinai Peninsula and the Golan Heights.

There are many great stories in this book and one that still stands out in my mind is in ‘Battlefield Carnage’. It was the second day of the war, October 7, 1973. The Syrian Air Force were in heated battles with Israeli Skyhawks, Mirages, and Super Mystere B2s [and maybe F-4Es]. Unfortunately, the Syrian Air Force also had to battle their own air defense forces. Most of the Syrian combats involved MiG-21s, primarily flying top cover for Su-7BMKs. After an engagement with Mirages, a flight of six MiG-21MFs was returning to their air base at Dmeyr when the Syrian air defenses deployed SAMs to welcome their pilots back. 1st Lt. Ahamad Sabbagh was killed while another MiG-21 on landing final with its gear deployed was destroyed by AAA. Another MiG-21 pilot was helping run cover for Su-7s on a ground attack mission when they got bounced by Mirages. Pilot Majid az-Zoughby was dumbstruck that the IDF Mirages had ignored the Su-7s and had attacked the MiG-21s flying above. After avoiding two sets of Mirage pairs, Majid az-Zoughby had to withdraw from the battle, being nearly out of fuel. Majid az-Zoughby’s MiG-21 was attacked by Damascus AAA and hit, although he did manage to land safely. His wingman was not so lucky when the AAA opened up on him as he was passing. Of the six MiG-21s in the flight, four were taken out by Syrian SAMs or AAA. Only two aircraft landed safely in exchange with a ‘probable’ against a Mirage. The authors do note that the Syrian pilots made little distinction between Mirages and Phantoms in their combat reports, so these Mirages could easily have been Phantom IIs.

Tom Cooper, David Nicolle, Lon Nordeen, Holger Müller, and Martin Smisek have delivered an incredible tome in Volume 5 of this series. I must state that this is not a mere photographic essay, but an in-depth pursuit that will take you some time to assimilate. I had seen this book at IPMS Nationals, but had passed it by. I’ve previously reviewed Volumes Three and Four, now I need to go buy Volumes One and Two. The rare photographs are aligned with the timeline and illustrate the text greatly. My thanks to Casemate and IPMS/USA for the chance to review this excellent book.