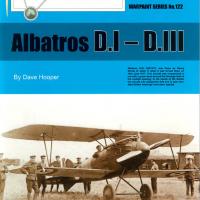 Author Dave Hooper is the founder of the IPMS Great War Special Interest Group and a long-standing contributor to aviation modelling journals. His comprehensive knowledge and attention to detail is well known.

Warpaint's latest is their standard A4 format softbound publication that is 48 pages (excluding covers), including a 2 page 1/72 drawing centerfold on the Albatros D.I, D.II, and D.III. I counted 69 clear black and white photographs, 48 color pictures of The Vintage Aviator’s Albatros D.II replica, along with 26 of Jan Polc color side profiles and 2 color top views. Jan Polc also contributes the centerfold (two A4 pages) that features 12 line drawings, 2 scrap drawings, and cross section profiles, all in 1/72 scale. The front cover features a color side profile of Hauptmann Otto Hartmann’s Albatros D.III, D.774/17 from Jasta 28w, and a black and white photograph of Georg Simon’s Albatros D.III, D2015/17 of Jasta 11. Forced down on June 14, 1917, it was designated G42 and painted with British markings as shown here. The upper back cover features two black and white photographs. The top one depicts Jasta 50 OAW Albatroses. The lower one shows Leut. Rudolf Hohberg’s D.III of Fl.Abt. A 263.

The Albatros D.I was the German response to the end of the Fokker Eindecker’s dominance in the air. Ordered in June 1916, fifty aircraft were in service by December 1916. Additional production shifted to the Albatros D.II that introduced a lowered upper wing (14”) and rearrangement of the cabane struts to improve upward visibility. Hauptmann Oswald Boelcke and Manfred von Richthofen quickly took advantage of the Albatros’ higher speed and superior guns and returned air superiority to the Germans. Albatros ended up producing 200 D.II and LVG added another 75 before the Albatros D.III arose. The Albatros D.III improved upon the D.II by going to a sesquiplane format and changing the interplane struts to a “V” strut. The D.III entered service in December 1916. The sesquiplane format inspired by the Nieuport 17 proved to be a bad idea, even for the D.V as it caused the shorter lower wing to twist until failure.

Dave Hooper includes many first person accounts and one account really stood out from Ernst Udet on shooting down Pierre de Cazenove de Pardines (a future French ace). “I succeeded in shooting up his engine. His propeller stopped. On the strength of that I approached him, and then the cheeky fellow raised a gloved hand and threatened me. I replied in kind, but that did not seem to make an impression on him, as he made an attempt in spite of that to glide over his lines. He almost succeeded in doing so.”

Dave Hooper provides a very readable text that is supplemented with clear photographs and color illustrations from Jan Polc. This is an excellent reference on the Albatros D.I, and D.III and would be a valuable addition to your reference library. Whether you are building 1/72 or 1/48, I would consider this edition essential as an aide to your build. This is a longer book than some Warpaint titles, but I was able to read this tome easily over two nights. If you own any of the previous releases in the Warpaint series, you know what you are getting. If this is your initial entry into this series, you will be quite pleased.