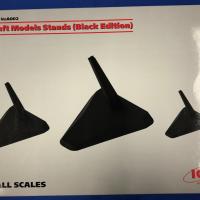 ICM has fast become a leader in the field of plastic models. These stands represent some of their latest releases. The black plastic set was preceded by a clear stand edition – A001.

This was a simple set and included six parts for assembling three black stands of different sizes for aircraft models. The stands could be used for the followed scales:

1/24 scale aircraft would be too large and heavy to be supported by the largest stand.

ICM’s packaging was superb with a colorful box top and a strong lid type box containing the parts and instruction sheet.

The stand bases were connected to the sprue by one attachment. I would have liked to see the sprue attachment on the underside of the stand so sprue clean up would not damage the plastic. However, the vertical stand part needed mold seam and sprue attachment clean up anyway. One base had separated from the sprue and became scuffed.

These stands were a simple and attractive way to mount a model aircraft inflight. They could be painted to suit the model color or theme being depicted.

My sincere thanks to ICM and IPMS USA for allowing me to review these stands.

All Three Assembled Prior to Clean Up and Paint.