Aircraft Carrier Juan Carlos I of the Spanish Navy 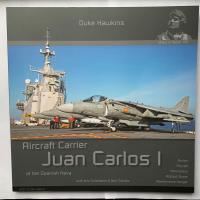 This is the first book of a potential new series from Duke Hawkins Books on aircraft carriers. The volume grew out of its earlier book on the Harrier II/AV-8B, as while working on that book, several of their photographers were given the opportunity to visit the Juan Carlos I while she was at sea conducting operations and ended up with an extensive collection of photographs not just of the Spanish Navy’s use of the EAV-8B Matador II (Harrier II Plus), but also of the ship itself and its other facets of its operations – helicopter and amphibious operations.

The book is divided into ten sections/chapters starting with a brief introduction on the ship and its missions, then providing more details on the different operations conducted from the ship and details of the ships’ spaces both internal and external. Each section is beautifully illustrated with full color photographs taken by very skilled photographers. As in the Duke Hawkins aviation books, there is little stand-alone text in the book, but the captions are extensive and highly informative.

The Juan Carlos I is classified as a LHD (Landing Helicopter Deck) and can operate 8-12 EAV-8Bs along with several different types of helicopters and amphibious craft now in service with the Spanish Armed Forces.

The largest section is devoted to the ship’s operation of the EAV-8B Matador II with many photographs of the aircraft on and around the ship with some air-to-air shots thrown in. The photographs illustrate all phases of ship-board operations for the Matador II and I found it interesting that the Spanish Navy has adopted the same color-coded flight deck jersey color system as is used on United States Navy ships – yellow for aircraft handlers, red for ordinance personnel, purple for refueling, green for deck crew and blue for chocks and chains crew. For modelers, there are several photographs showing variations in colors for radomes and other panels that will help break up the monotony of a straight grey jet. There are also photographs of different loads on the aircraft pylons, such as external tanks, triple ejector racks and the Litening II pod.

The section on helicopter operations includes photographs of some of the variety of helicopters that can be operated from the ship, such as the AB 214 (Huey), Sea King, SH-60 Seahawk and Hughes 369 of the Spanish Navy, the Chinook and Cougar of the Spanish Army and there is even a photo of a USMC CV-22 Osprey onboard.

The Juan Carlos can also conduct amphibious operations by embarking landing craft such as LCM’s or LCACs (Landing Craft Air Cushioned). During the photographer’s visit, the Juan Carlos had two LCM-1 landing craft embarked along with Spanish Navy Marines with their vehicles. The Juan Carlos can carry 4 LCMs in its deck dock which can be partially flooded to allow the LCM’s to exit and re-enter. The section on amphibious operations includes photographs not only of the LCM’s all loaded and heading out, but also of them unloaded and “beached” in the deck dock. Also included are good photos of the Marines’ vehicles and how they are secured for sea.

The section on the ship itself includes outstanding photographs of many details of the interior of the ship such the bridge, engine control room, sick bay, flight deck control, hanger deck and the crew briefing rooms. There are also photographs of the ship’s superstructure including the masts, antennae, radars, its self-defense guns and other details.

The final chapter of the book depicts operations from Rota, the shore base for the Spanish Navy’s Matador IIs and helicopters. There are photographs of aircraft and helicopters outside on the line ready for flight, but also quite a few photos of aircraft inside the maintenance hangers undergoing maintenance.

This is an outstanding book and I hope that HMH can continue the series. Highly recommended!

Thank you to HMH Publications and to Casemate Publishing for providing the review sample.