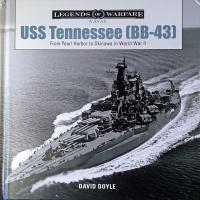 Launched on the last day in April, 1919, and commissioned just over three years later, on June 3, 1920, this sixth vessel to carry the name Tennessee was the name ship of her class (which included her sister, USS California) and the last US battleship to carry 14” guns. In this Naval edition of his extensive “Legends of Warfare” series, author David Doyle provides another extensively illustrated history of this famous warship. While each chapter - covering Construction; Launching, Fitting Out and Commissioning; To War (with subsequent descriptions of her collision with USS California and participation in the action in Surigao Straight); and The End of the Line - includes a brief introductory written description, the bulk of the written information comes as captions to the hundreds of photos (the vast majority in sharp black & white, with four color photos of her following decommissioning).

As with many of Doyle’s previous works in the series, a large number of the photos are published here for the first time. Many, covering her between-the-wars years, come courtesy of the USS Tennessee Museum and give a good picture of “life at sea”, showing a wide variety of shipboard activities such as gunnery drills, aircraft handling, and boat launching as well as less mundane activities like “crossing the line” ceremonies and Santa’s arrival during the Christmas holidays.

What this reviewer found particularly interesting were photos of her repair and reconstruction, first in February, 1942 following Pearl Harbor, where her damage was minimal (she was moored inboard of USS West Virginia and thus suffered no torpedo damage) and included installation of new 1.1-in AA guns, shields to her single 5” AA mounts and replacement of her entire 12-gun 14” battery. Her major reconstruction would begin six months later, which would completely alter her pre-war appearance and make her into one the most powerful 14-in gunned warships afloat. Later photos document her damage from shore bombardment duels at Saipan, a collision with sister USS California, and kamikazes off Okinawa, providing details of the hull, superstructure and armament.

This volume (as do all of the Legends of Warfare books that I’ve seen) provides a boon to enthusiasts and modelers looking for detailed photo references on the chosen subject. While this isn’t a complete reference on the subject (only one set of drawings is provided - one profile of her following the major reconstruction along with an interior compartment layout along her centerline), it is an impressive collection of photo illustrations of the ship from her keel laying in 1919 to her decommissioning prior to her scrapping in 1960, and is well worth the modest $19.99 price tag.

Thanks to IPMS and David Doyle Books for providing another outstanding reference book for review.