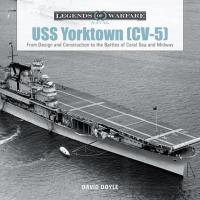 The USS Yorktown (CV-5) is one of the important US Aircraft carriers of World War II. Her level of participation in our Pacific Theater of operations is immeasurable in terms of giving as well as taking. With the vast distances involved in the Pacific, it was clear to the military planners of the day a new strategy must be devised. One of the key components of that strategy would hinge on fast carriers and support ships to sustain the island-hopping campaigns that would bring our forces closer to the Emperors front door. Yorktown played a significant role leading up to and into the early days of the war. As the first purpose built, from the keel up aircraft carrier the designers started with a clean sheet of paper and incorporated many of the lessons learned on preceding carriers.

This book of 112 pages covers the history of Yorktown from construction through her final minutes as she succumbed to two torpedo hits from Japanese submarine I-168 on 5 June 1942. Award-winning author David Doyle has put together in text and photograph an impressive account of this significant ship. All the photographs are rendered in mostly crisp black and white exposures, and many are in print for the first time. The action shots are impressive and while a bit blurry gives the viewer a feel for the action going on. A few page shots are included with this review courtesy of the author.

Laid out in 6 chronologic chapters, the history of Yorktown begins with the design and construction phases. Each chapter begins with a short explanation of its content. All photos are captioned noting interesting features, or the action of people in the shot. Additional chapters are devoted to commissioning, the prewar years, the battles of Coral Sea and Midway, concluding with the loss of Yorktown.

The book is printed on high quality heavy paper and presents a good resource for modelers and anyone with an interest in World War II history. While there are other books on the Yorktown, this book brings many unpublished photos together in a manner that is logical and flows well. The pictures that make up the Yorktown’s final moments are poignant and compelling and a fine tribute to the ship and her crew. The prewar chapter is fascinating. The early Naval aircraft on the decks with the high visibility markings show the Navy at peace time. As the chapters progress, the change to drab colors and a more subdued approach to ship and aircraft markings is noticeable!!

I like this book very much and highly recommend it. Mr. Doyle has spent considerable time on this volume both as a researcher and author, and then getting it to publisher. That effort is rewarded nicely in a work that should be of interest to both modelers and the general public. The book is reasonably priced at about $20.00, and available directly from Mr. Doyle at WWW.DavidDoyleBooks.com.

I would like to thank David Doyle for him graciously passing along the page shots that accompany this review, and the sample for review. And to IPMS/USA for allowing me to review this fine book.