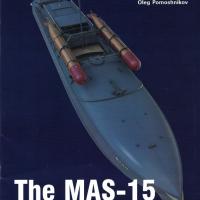 The MAS.15 Italian Navy Torpedo-armed Motorboat is one of the latest in Kagero’s Super Drawings in 3D series. This edition is in their standard 8.25” x 11.75” format softbound publication that is 52 pages (including covers). This volume starts off with nine pages of historical text followed by 34 pages of color 3D illustrations. The next six pages are full of black and white line drawings. As is sometimes available in other volumes of this series, there is no centerfold that folds out with line drawings. This line drawings in the last section features Motorboat profiles at 1/72nd scale, 1/24th scale for the Isotta Faschini 450hp L56 engine, and 1/25th scale for the 6.5mm Colt-Browning machine gun. Two of the line drawings have no scale specified. I counted nine black and white period photographs, 59 color 3D illustrations, 22 line drawings, and one table.

The Motoscafo Armato Silurante (MAS) was Italy’s class of torpedo boats used during World War I and World War II. At least 244 MAS boats saw service in World War I in many configurations. Indeed it was common to modify these boats to specific missions from torpedo boats, to gun boats, to anti-submarine boats (depth charges). The most successful operation was executed by Commander Luigi Rizzo on MAS.15 when it was able to sink the Austro-Hungarian battleship on June 10, 1918.

Oleg Pomoshnikov provides a short history of the development of the Italian MAS boats in World War I, then jumps into the color illustrations showing off the details of the MAS.15. The MAS.15 was not a huge boat compared to German and American torpedo boats, as it was 15 meters in length. Luckily, the MAS.15 survived the World Wars and is on display at the Sacrario delle Bandiere naval museum in Rome, Italy. The sections include:

Model-wise we have been blessed with several MAS torpedo boats. Choroszy Modelbud has issued at least fifteen highly detailed resin kits in 1/72 scale that encompass Italian, German, Swedish variants. Italeri has released an even more detailed injected 1/35th scale kit of MAS.568 if you have the display space.

I consider the Kagero Super Drawings in 3D an essential reference for model building. You get angles you can’t really see in other references and they are in full color. This being the eighty-second volume, they have managed to cover quite a few ships. While this tome is specific to the MAS.15, it will certainly support the details for many of the MAS torpedo boats. You do get a history of the World War I development of the MAS concept, but it would have been nice to have had more information on the MAS.15 specifically since it was so famous. Nevertheless, the raison d’etre for the 3D series is the artwork, and that alone is worth the price of admission. If you have any of their previous books in the Super Drawings in 3D series, you know how great a value this book is. Highly Recommended!