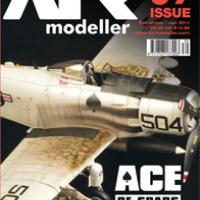 This issue is one I’ve been looking forward to for a while now, and the reason is the subject on the cover…Zoukei Mura’s beautiful new 1/32nd scale A-1H Skyraider! In addition to a full 10 page build article, there is also included a ten page walkaround with numerous photos in both color and black and white. Without a doubt, this is likely the most impressive array of interesting subject matter, well documented build articles, and some of the handiest tips and techniques. The contents of this issue are as follows:

If you haven’t taken the time to check out an issue, I feel that you’re really missing out on something special. Many thanks to Air Modeller for the review sample and to IPMS for the opportunity to provide it.