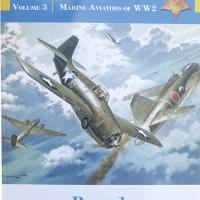 Medal of Honor Volume 3 Marine Aviators of WW2, Part 1 tells the story of six Marine aviators who earned their countries highest award for valor, the Medal of Honor, in World War 2. Every aircraft in which the medal was won is shown in color profiles, together with profiles of some of their Japanese opponents. The story of these Marine aviators is told in detailed text, 245 photos (58 color), 33 aircraft in color profile, 23 color graphics, and 14 black & white graphics in its 164 pages.

Primarily a publisher of World War I subjects, Aeronaut books has added 2 titles to their catalog that highlights WWII Aviators and their exploits. Specifically, U.S. Naval Aviators awarded the Congressional Medal of Honor while in the service of the United States Marine Corps. Oddly enough, the Aeronaut Books website does not list this book, or it’s companion Volume 4. Conversely, it appears the site has not been updated since 2018. You can find them for sale on Amazon, though.

Penning this book was obviously a labor of love for our two authors. Cited in their “Acknowledgement” are sources such as a Brigadier General, the lead Historian of the USMC Historical Division, the USMC Head Photo Archivist, and on and on. Clearly, a great deal of serious research went into producing this book, and it is evident. I did pick up on a few typographical errors in read the book, but they are very minor and do not detract from the overall product.

Six Marines are featured in this edition:

Each chapter includes a bio of each pilot’s beginnings, and covers squadron assignments. Best of all, each chapter delves into the combat exploits of the men, providing detailed, blow-by-blow accounts of specific air combat sorties, including the Battle of Midway. This makes for exciting reading. The book contains a myriad of fascinating photos, most of which I’ve not seen before. Each chapter concludes with the CMoH Citation awarded to each pilot. The old History Channel series “Dogfights”, featured a segment on Jefferson DeBlanc (SO1 EO4, 2006), and reading his chapter added greatly to his story.

The book also contains numerous color profiles of the aircraft flown in these dogfights, including a few Japanese machines. Color photos of the sole existing Vought SB2U-2 Vindicator and a Grumman F4F-4 Wildcat at the U.S. National Naval Aviation Museum in Pensacola, Florida are also present. They provide a walkaround setup of the aircraft. Modelers will appreciate the photos, as they depict very clearly the severe weathering the machine’s paint underwent in the harsh South Pacific environment. Many will serve as a template for “correctly” weathering your Wildcats, Corsairs, and Dauntlesses.

The photos alone are worth the price of admission, but the stories of these incredibly brave men are inspirational and seal the deal. My thanks and gratitude to Aeronaut Books and IPMS/USA for the review sample. Highly recommended.