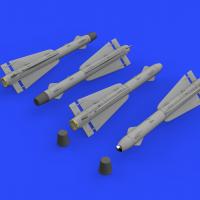 The AIM-4D was the first operational guided missile in the USAF and entered service in 1956. Its limited maneuverability and non-proximity fuse made it ineffective against fast turning fighters and it saw limited duty due to those shortcomings. Eduard has released an excellent multimedia kit of these missiles in their Brassin line in 1/32nd scale. Inside the package, there are parts for four complete missiles. There are four well cast missiles bodies, four seeker head covers, four clear lenses and a small fret of PE for detailing the engine section. There is also a nice set of markings for the one-color scheme.

To prepare the missile body, I cut it loose by cutting the four fins free using a set of sprue cutters. I then cut the four arms supporting this off, so I had direct access to the motor section. I used a razor saw and slowly cut this free. I then sanded the bottom of the fins and any mold seams at the bottom clean. I used a new #11 blade and trimmed out carefully around the four tail fins. It also calls for a 3mm x 4mm hole to be drilled in the engine section which I missed on the first missile. I added the photoetch ring to the motor and glued tight and sanded smooth. If you want to add the seeker covers, you need to remove 3.5mm of the nose of each rocket. The clear seeker heads are so well cast, I wanted them exposed so this step was skipped.

Painting the missile was simple- the front of the rocket is white, and the back is red. This was painted using Tamiya acrylics and let dry. There are a fair number of decals to add- 22 in all. They are well printed and mine settled with water. Take your time adding them as they cover all sides. Once dry, I added a light oil wash and flat coated that once dry. I cut the clear resin seeker head loose and added it (which fit like a charm) and the missile was ready to go.

To my knowledge, this is the only one of these I have seen in 1/32nd scale. It is well cast, easy to build and very well detailed as well as colorful. Highly recommended

My thanks to Eduard and IPMS/USA for the opportunity to build this beautiful piece of resin.