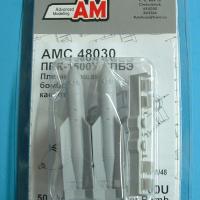 A new manufacturer from Russia has come on the scene to offer perhaps the widest range of munitions than we have seen so far on the market – Advanced Modeling (AM). Multi-media kits with cleanly cast in gray, durable resin and the detail is superb.

This set provides a pair of Gliding Cluster bombs, the kind of weapon best suited for personnel or soft skinned weapons caught in the open. Unlike NATO nations who have stopped the use of cluster munitions, the Russians still employ them in ground support. They were infamous in Afghanistan and 30 years later, Russia, by some accounts is employing them in Syria. It is a variant I am not familiar with, having only seen the standard gravity weapon. I am sure this is the first time this weapon has been kitted. What AM provides is a bomb, in a single casting. The base plate, steerable fins, and nose fuse are cast separately and must be attached. Oddly there were no decals for this weapon like AM’s other weapon sets.

Assembly was a bit of a challenge. Work carefully to remove the pour stub first and then I chose to clip away the excess resin with sprue nippers. One key to attaching the base plate is to ensure clean, straight cuts so the components fit well. I cleaned up the fins with a few swipes of a sanding stick, but took more time to ensure a good fit of the baseplate before attaching with CA. What was tricky was the attachment of the fins. Because the fins are so thin there is little for the CA to bond to. Plus, the instructions are unclear as to what to remove and what to keep. Photos of the real thing helped. The fuse, in comparison was a breeze. To paint the weapon, I did no preparatory work. The instructions call out for FS26473, so I sprayed the bombs Model Master Aircraft Gray FS16473. Later I applied a flat coat of Testors Dullcoat and used black wash to highlight the details.

Overall it was a relatively fast modeling exercise. It is an interesting weapon to have in your scale inventory. Thankfully, the AM instructions list the aircraft types which carry this weapon. A great little enhancement for your modern Russian aircraft, which I highly recommend.