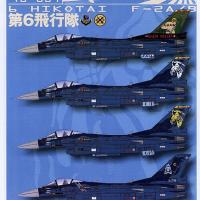 OK guys, a show of hands; how many of you don’t like Hasegawa kit decals? You’ve had bad experiences with them and hate ‘em to the point that you won’t build or even buy a given Hasegawa kit unless you can get aftermarket decals for it? Not a problem for those F-Teen kits where you easily have many more aftermarket decal choices than kits. However, when it came to cool looking, non-gray jets, like the Mitsubishi F-2, you were stuck….until now.

What’s in the Bag?

Afterburner has solved the 1/48th scale F-2 problem with this excellent release, which, as decal sheets go, is a complete package. In the large, resealable plastic bag, you’ll find an attractive cover sheet with sample color profiles of included aircraft (see Cover Sheet); a large 8” x 10” decal sheet and a 2¾” x 3” supplemental sheet (see Sheet 1 and Sheet 2), both printed by Cartograf; 6 pages of color profiles/instructions; and a 2-sided black and white stencil guide (see Stencil Guide 1 and Stencil Guide 2).

Markings are included for 9 F-2As and 1 F-2B, all in navy blue over intermediate blue. You also get complete stencils for 1 aircraft which replace the kit decals.

What Markings Are Included?

The featured aircraft and the one I did is F-2A 52-8535 in the 6 Hikotai’s 50th Anniversary scheme, Tsuiki Air Base, October, 2009 (see Profile 1). The highlight of this aircraft is the vertical tail. The base of both sides of the tail are black while the remainder of the left side is in the tan/light green/dark green camo colors of the F-1, and the right side is silver, with both sides featuring some attractive red and yellow markings. I found some pictures of the left side of this aircraft on Airliners.net and from what I can see Afterburner’s decals look spot on

Next up are 3 F-2As from the 2009 Air Combat Meet (see Profile 2). Each of these aircraft has a “Grim Reaper” on the tail, one in gold, one in silver and the third in black. Another neat feature for these aircraft are yellow arrow and tail decals for the AAMs; a nice touch. Also included are stencil decals for the tire sidewalls and a squadron symbol decal for the wheel hubs.

This is followed by 3 F-2A “Skull Riders” from Tsuiki Airbase, May 2010 (see Profile 3). The markings for these aircraft are on the supplemental sheet and feature a gray skull and crossbones for the vertical tail and some stylized, gray stripes for the fuselage and wing tanks.

The final set of markings are for 2 F-2As and an F-2B from Cope North, Anderson AFB, Guam, 2009 (see Profile 4). These aircraft appear to be in standard markings; nothing out of the ordinary. The only special items are sharks mouths and eyes for TERs but if you want to use the shark mouth decals you’ll have to source the TERs from somewhere else as they’re not included in the kit. You can find pictures of these aircraft. If you look closely at the third picture from the top, you can vaguely see the shark mouth markings on a TER.

How Do They Work?

In short, my experience with this sheet was a very good one. The Cartograf-printed decals are thin but with very tough carrier film that stands up to a lot of pulling and pushing. I didn’t tear one decal and that’s saying a lot considering all the abuse those walk way lines took trying to get them in the right places. They fit, they’re in register and the color is excellent. The decals reacted well and predictably to setting solutions. For most, it only took MicroSet to get them to conform but a few needed MicroSol and in a few instances, I had to use a #11 blade and/or a pin to get a decal fully into a panel line or rivet.

There are just a few words of caution though. First, I was hit in the face with the reality of all those stencils. I had a flashback of a fully-stenciled 1/48th scale F-4C I built about 30 years ago and the hours I spent pouring over a MicroScale stencil data sheet looking for the next stencil. Oh the horror! Not nearly so bad here. There are a ton of stencils but Afterburner has made it easier to locate your next stencil by grouping them on the sheet by the part of the aircraft they go on. Stencils for the bottom of the aircraft are in a section labeled, “Bottom Fuselage”, stencils for the top are labeled “Top Fuselage”…now pay attention… stencils for the port side are labeled, “Starboard Side, and stencils for the starboard side are labeled, “Port Side”. No, that’s not a typo and here’s your first word of caution; the labeling of the port and starboard stencils is reversed. The stencil placement guide is correct and the ID numbers on each decal are correct but on the sheet, port is starboard and starboard is port.

Now here’s a good news/bad news thing. The good news is, in many areas Afterburner has grouped multiple stencils onto one decal. The bad news is, in many areas Afterburner has grouped multiple stencils onto one decal. Good or bad depends on how you feel about this practice. I like it because it makes applying all those stencils easier and I like a lot of stencils on my models, where appropriate, it makes the model look busier. But some of you may not like it because with more carrier film, it increases the chance of silvering. Even if you like this practice I think they went too far on several of the decals. I counted as many as 15 stencils on one decal, which isn’t necessarily a bad thing if they’re all close together but some of these decals had little bits of stenciling sticking out in all different directions connected by a little strand of carrier film. I swear, some of ‘em looked like a map of a gerrymandered Congressional district. On some, I had to cut the little strands of carrier film and put the wayward stencil on separately, which defeats the purpose of grouping them together. One plus though, the carrier film is tough and can take a lot of punishment. In the end, I only 1 bit of silvering and it was one of these strands of carrier film connecting a wayward stencil. Fortunately, I hadn’t pulled it tight so it didn’t attach itself at all; a cut here, a cut there and it lifted right off with no residual silvering

A final word of caution: Use water and not a decal solvent as the initial wetting agent. With aftermarket decals, I generally put MicroSet on the model then put the decal on top of that and slide it into place. However, the decals wanted to grab the surface immediately when I did this. There were several instances where I had to slide a #11 blade under a freshly laid decal and peel it up so I could move it into place. After a few of those, I started putting water down first, getting the decal in place, wicking the water away with a tissue, THEN putting MicroSet on the decal.

This is my first product from Afterburner and I’m very impressed as this is a quality product. As you can see from the pictures of the completed kit, these decals make for a very attractive model. Everything seems to be well researched. The color profiles are large and easy on the eyes. The stencils are extensive which can sometimes lead to a true eye test but the stencil guide and the identifiers for each stencil, both on the sheet and on the guide, are clear and easy to read. Separating stencils by section of the aircraft they’re to be placed on is a big help, but remember; PORT is STARBOARD and STARBOARD is PORT. I liked this package so much that I went ahead and bought one of their F-111 sheets.

Many thanks to Afterburner decals for providing this review sample.