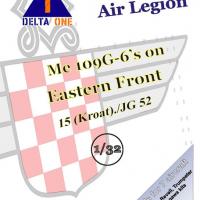 With the release of the Revell-Germany Bf-109G-6 and G-10 Erla it is just natural to want to put markings on them that aren’t included in the box.

Delta One has been providing some unique looking 109s on their decal sheets and this one is no different. The Croatians had a staffel similar to the Spanish staffel in JG-52. They were proud and carried the This decal sheet provides markings for seven aircraft, six G-6s and one G-5. Most of the aircraft sported the “Flying or Winged chessboard” on both sides of the fuselage.

The decals are printed on a 6x5 sheet with an additional separate sheet containing one chevron. The swastikas are broken down into two parts. There is a variety of the Flying chessboard. Interestingly is that the lack of standard markings. Typically a unit would have the same size and same color markings but that is not the case with the Croats. The decals are in perfect register. The one chevron does not have a white outline which is why there is a correction sheet.

The instructions are printed on three two sided A4 sheets in full color. The aircraft are all in RLM 74/75/76 in a variety of schemes with yellow wing tips, fuselage bands, and lower engine cowling. Interestingly, the upper wing camouflage is different on all of the aircraft almost every variation that I can recall.

The first aircraft is from Croatia’s number one ace, the CO of the unit, Oberleutnant Mato Dukovac. His aircraft is marked with a “Black 1 Chevron” with white outline. There is photographic examples of this aircraft having an unfinished flying chessboard. And also there is evidence that the chessboard was finished at some point.

Aircraft two has a “Red 9” with a darker mottled finish. It was flown by Feldwebel Eduard Marinko. He crashed this airplane after being hit by German flak. The stammkennzeichen is partially visible.

The third aircraft is “White 6”. This aircraft was shot down while being flown by Unteroffizer Vladimir Salomon. The Unteroffizer drowned in the subsequent bailout. The “White 6” is very large.

The fourth aircraft is a G-5. It is “Black 5”, however the 5 is just an outline and quite large. This aircraft was heavily overpainted in 74/75.

Aircraft five is “White 13” flown by Unteroffizer Jozip Kranjc. This is the only aircraft on the sheet that does not have the flying chessboard.

“White 5’ was flown in November 1943 by Unteroffizier Josip Kranjc who had 9 confirmed victories.

The final aircraft is “White 7” flown by Unteroffizier Dragutin Gazapi which was flown until it was shot down by Airacobras.

The decals are perfectly printed and show some unique markings for a unique staffel. These are the perfect accessory for your G-6. The research is very well done. This is another great decal sheet from Delta One.

Thanks to Delta One and IPMS/USA for the review copy. The Delta One website has not been launched yet but you can obtain your copy by contacting them at email delta1decal@gmail.com . Make sure you tell them you heard about it here. While there check out their other decals.