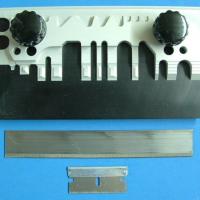 I would like to thank Julie Lockwood for this review sample.

I would consider myself to be very experienced working with photo etched parts, having added them to armor, aircraft and ship models. In fact I love the challenge of working with the media. Up until now, however, I have roughed it, being content working the metal with a few pairs of pliers, scrap dowel, a steel rule, a no. 11 knife blade and a scrap piece of acrylic. In fact, I have turned up my nose at the fancy PE folding tools on the market. So Julie Lockwood of Kalama Precision Machine may not have realized that she was throwing down a challenge when she asked me to review some of their latest PE working tools. Suddenly, I was in the lion's den … alone.

The Small Shop makes a slew of tools for working PE. The Hold & Fold is still perhaps their best-known product. The three samples sent were perfect for review, in that they allowed me to run through the whole PE process. I focused on the complex bending required to assemble the pilot and co-pilot seats from the Eduard set 49372 B-26 Marauder Interior. These latest Eduard sets can be quite challenging and I thought a good test of the tools provided.

The Large PE Cut-Off Set is perhaps the simplest tool of the group, but a good starting point. Included in the set are two large 8 x 10 black acrylic sheets, and two clear Lucite hold-downs with down handles. The handles will need to be glued to the hold-downs, but for this demo I did not use them. The 8 x 10 sheet was a good work surface. Large enough to hold most PE frets on the market, the black color provided good visibility of the attachment points during cutting. It was also good for finding the nubs left when the blade is not quite a close to the part as it could have been. While I thought the hold-downs were at first a bit of a distraction, they worked great in keeping the fret flat during the work, preventing bending of the surrounding PE. It also prevented parts from flying away. Thoughtfully a second sheet is provided when the first one is eventually marred, but I found that the dense acrylic did not yield or scratch easily, providing clean cuts. It also provided a good surface to keep the removed parts organized until used. One sheet should last a long time. I give this tool thumbs up for usefulness and value.

With the removal of the parts completed, I then took out the 5-Speed Hold and Fold Workstation. I have to say that on aesthetics and design alone, this tool is a beauty. The base is a solid piece of machined black anodized aluminum with rubber feet so it will not slip. The black base makes it easy to see the PE being worked. Mounted to it, with to easy to turn plastic knobs, is one of the most complex pieces of machined aluminum that I have seen. The metal is polished and sits tightly on the base. It comes with a single edge razor blade and a longer 5-inch blade to assist with folding. So how did it perform? I used the tool to do nearly all of the bending of the PE parts in the chair assembly (I fell back to old form and used pliers for the radius bend of the seat pan, but the tool will achieve the same effect). The tool was quick and easy to use and I was able to make the necessary bends without inducing twist or warp in the part. The blades provided ensured clean bends, even with long lengths. With so many shapes available it clearly will take some time to master the full potential of the tool, but I found my speed increasing as I went along; the instructions provide some hints for the use of the varying shapes provided. I found that by tightening just one side of the tool was sufficient to clamp the part during bending. The overall size of the tool is not cumbersome and it did not get in the way of my work when not in use. I have to say that this is a tool that would have made my PE work in the past easier. I have to give the Five-speed two thumbs up.

The last tool reviewed was the Brass Assist Deluxe Rolling Set. This is another complexly milled base made from aluminum, with varying lengths of aluminum rod used to help roll the metal. I like the fact that this set has metal dowels rather than wood, which tends to give way. This tool is a bit more perplexing in that it has a lot of functionality built it in, query what are all of the bend points for? A lot of the shapes are for armor work to include tie down points and grab irons. But in ship work these bend points are just as useful, especially in large scales. It is also useful for fine wire. The underside is a large sheet of rubber, so that the tool does not slide, but also it is a work surface as well. The rubber is designed to yield to provide the ability to make shallow curves and true round bends. I used the tool to make the shallow radius bend of the pilots seat back. A little pressure with one of the dowels on the rubber surface quickly created a perfectly shaped back. This tool would also be good for the parabolic shape of a radar dish or the circular gun shields on ship models. I give this tool a thumbs-up as well, in functionality and ease of use.

The bottom line - taken individually or together, these tools make PE work much easier than the methods that I have used in the past. All of us are ham-handed from time to time as we work with PE, and we all have lost parts to the carpet monster. Each of these tools will help prevent future mishaps. Will I abandon all of my past tools? Perhaps, they have a role to play, but the Large PE Cut-Off Set, the 5-Speed Hold & Fold Workstation, and the Brass Assist Rolling Set will certainly change the way I work PE and will ensure better results.

Finally, I have to commemorate the passing of Pete Forrest the inventor of the Hold & Fold. Pete was tragically lost in a motorcycle accident in the spring of this year. The modeling community is poorer for his loss, but his legacy lives on in his creativity and craftsmanship of the tools he left behind.