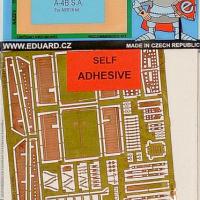 This photo-etch detail set provides a higher level of detail for the relatively recent release of the Airfix A-4B kit. It contains two frets of parts. The smaller of the two is self-adhesive with some of the parts pre-painted. These parts are meant largely for the cockpit and ejection seat. The larger fret is meant to be used largely on the airframe and isn’t self-adhesive. The detail on all of the parts is crisp, as we’ve come to expect from Eduard.

Starting with the cockpit, I discovered that the set’s self-adhesive parts had run out of stickum. When I received the set, it wasn’t newly issued, so I’m assuming the adhesive has a shelf life which had run its course in the interim between IPMS receiving the set and my getting it for review. Smaller parts, such as the rudder pedals and seat belts, just fell off the backing paper when they were cut from the fret, their adhesive gone altogether.

The photo-etch parts fit to the plastic kit parts reasonably well. It was only after I had most of the cockpit tub and seat painted, with the photo-etch applied, that I noted that several of the Eduard parts were separating from their parent plastic parts due to the self-adhesive issue. This caused me a little bit of extra work, as I had to remove the photo-etch pieces, do some repainting, and then attach the Eduard parts once again. I reattach the PE parts with thin CA in some places and Future in others.

With all that said and done, though, the interior came out looking pretty good. Fitting it into the fuselage halves was another matter. In order to get the fuselage halves together, some of the set’s metal edges had to be sanded down. This isn’t unusual based on some of the detail sets I’ve used in the past. I suspect the main problem is the fact that though the Eduard parts are made to scale, a plastic kit has thicker walls than they’d have if the aluminum skin of the real aircraft were scaled down.

With the cockpit installed, the rest of the build will continue; and it’s a full build. I foresee the next installment of this review to cover some of the bigger parts, like flaps and slats. Stay tuned.

I really appreciate Eduard supplying this detail set as well as IPMS/USA for allowing me to review it. Since I flew A-4Bs, it’s one of my favorite aircraft.