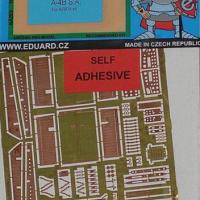 This follow-up review of Eduard’s detail set covers pretty much “everything else” in the set since the cockpit was covered in Part One. I won’t summarize that section here, but have provided the link to it if you’re interested in reading and referencing that one to get the complete picture of this detail set.

A drawback of this entire build had nothing to do with the Eduard set---the Airfix A-4B kit I purchased was damaged---it came out of the box with three of the six tiny little slat tracks broken off, and worse yet, missing from the poly bag to boot. This further complicated the project and caused me lots more heartburn and delay than if I’d had a complete kit.

My fix for the slat tracks was that I’d replace them with styrene strip, but it was too flimsy for the purpose, so I turned to flat brass bar stock. (Photo 2) That sounds simple enough, but it turned out to be a real chore, trying to drill tiny holes in the wing leading edges to accept the inboard ends of the tracks (Photo 3). In the end, I more or less reverse-engineered things and glued the tracks to the slats themselves (and the Eduard detail on their lower surfaces) rather than to the wing as the kit provided. (Photo 4)

The brass fret contains a lot of detail, and most of its area is for the flaps. Here was a real problem---the A-4B had simple split flaps, but the Eduard’s set represents a spoiler-equipped later-model Skyhawk. Eduard instructs the modeler to cut out the inboard sections of the wing and replace them with their brass. Further, the detail for the interior of the flap wells has the access holes for the spoiler actuators. Simply put, these are incorrect for a B model, so I elected not to use them.

Another section of the brass fret which I opted not to use were the four parts for the interior of the speedbrakes. These are very nicely done, but the holes in them don’t line up with the ones in the kit. Small thing, maybe, but it would have meant filling in the holes in the kit’s parts and that wasn’t on my menu because I’d lose their depth. Sorry.

Wheel well details and parts for the gear include tie-down rings and inserts for all four gear doors; details for the centerline and wing racks (Photo 5). Sway braces and fillers and inspection plates for the drop tanks are provided, as well as a nice four-part access ladder. (Photo 6)

In Part One, I painted the cockpit, so the Eduard details pretty much got covered up---and since painting the aircraft including all the exterior details would pretty much do the same, I elected to take the “glamour shots” of the brass bits before moving the model to the paint shop. I think they’ll give the builder a good idea of what’s in the Eduard set.

In summary, this set is a mixed bag of great and not-so-great. The parts themselves are beautifully rendered, but have the aforementioned incompatibility with the target kit. However, just because the flaps are incorrect for my B model, those parts can likely be adapted to an A-4F, J, or M instead, so they won’t be tossed and will become spares box fodder. A new Eduard set rather than this dated one (explained in Part One) would probably also feature good stickum on the cockpit’s self-adhesive parts. That was another stumbling block I had to overcome in this build.

If I were more familiar with---and better at working with---photoetched parts I’d have had an easier time of things, and the broken and missing kit parts didn’t help me along either. Despite my problems with it, the photoetched parts are very nicely done, and I thank Eduard for supplying this detail set and IPMS/USA for allowing me to review it.