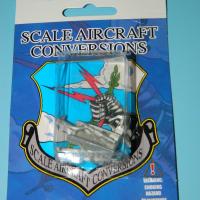 IPMS/USA thanks Ross and his Team at SAC for supporting the IPMS USA reviewer corps with one more of many monthly releases, with extremely useful and well-thought out landing gear additions for the modeling crowd out here in the modeling world. And thanks to IPMS leadership for sending it for review.

This review is for the SAC landing gear released for the 1/72 Valom B-45 series. (Yes Mrs Robinson, there was an aircraft named “Tornado” before the “Tornaaaahhhdo” in the European sense.) This SAC gear is extremely simple, much like the kit itself. As a note, the Valom B-45 kits are easier to build than the other 1/72 B-45s out there as well... even though it is also a short run style kit, the quality is much more refined. SAC’s set is comprised of six parts… and are quick additions.

The SAC gear includes a metal nose gear well, and the nose strut incorporates the extension and downlock strut arm. This is good because the Kit’s dual nose gear axles are of the same relatively soft plastic of the rest of the kit, and would be a failure point given the amount of nose weight required to balance the jet on the tires. Likewise, the main gear struts incorporate one of the two side struts, which provides not only greater strength but easier assembly and parts fit. A noteworthy “Modeler-friendly” point here is the separate side struts have removable ID tags with L or R on them. First one to respond with the correct reason for those letters gets to move up to the front of the class next to the other intelligent modelers.

The struts themselves accept the photoetch kit parts as well as the plastic, given the use of superglue to attach them. The only reason I do not have the tiedown rings on the gear is I had a sneeze moment and they disappeared. These parts are somewhat light and difficult to cement, so I count them gone. Am I gonna make new ones? Probably not.

Overall the picture tells the story of this installation. The nose gear parts fit right where they are supposed to, and are difficult to mess up. You have to be actively aware to have a bad result. Same for the main gear, the two kit gear well boxes fit right in place in the wing, and the SAC gear slides right into the socket with the side struts in place…and there is no question of how, other than you can put one gear on the wrong side, but it will look wrong and the torque link will be facing the wrong direction. Follow the instructions, sez I.

As usual the strength of the gear makes SAC gear worth the extra cost for kit survival; I highly recommend this gear for the robust nose gear due to the amount of nose weight you will have to add to get it to sit on the gear. Thanks again to Ross and his crew for working with us at IPMS USA!