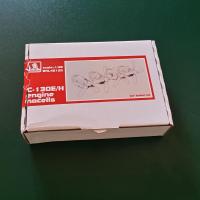 The Lockheed C-130A through H model aircraft are powered by a series of Allison T-56 engines driving a set of Hamilton-Standard 4-bladed props. The 4-bladed Hamilton-Standard props were original equipment on the C-130B through the C-130H models, and the props were later retrofitted to C-130A aircraft. Each C-130B through C-130H engine is housed in a nacelle that is slightly longer than the nacelles on the C-130A aircraft. The difference can be seen in a side-by-side comparison of the Italeri kit nacelles (designed for the C-130A) and this aftermarket kit.

This aftermarket kit comes with a total of 36 pieces to replace the kit parts. Each propeller has 5 individual parts – 4 prop blades and the spinner. Each nacelle comes as two pieces, the main nacelle and the front intake/prop base. My sample came as a crisp set of resin parts. All the panel lines and the details match the actual nacelle and brought back quite a few memories of working around the prop and nacelle during my 20-year career in the Air Force as a C-130 Crew Chief. I have a photo of the #1 engine and prop on my aircraft as a reference.

The nacelle is fairly easy to assemble – the hardest part I found was gluing the oil cooler flap into position, which is the squarish, U-shaped part on the bottom of the nacelle. I may have trimmed too much from the forward end of this flap, but there is a small gap when the flap is full open. This flap can be glued either full open or full closed (or any position in between), and the instructions show the flap being full open. The “aerial” the instructions refer to is actually a drain mast, and is used to drain both fuel from the engine on shutdown and any hydraulic fluid/oils that leak inside the nacelle. I cut the nacelle face just short of the joint line, opening up the intake for a more realistic appearance. The two main nacelle parts mate perfectly along a panel line.

Each propeller blade can be positioned individually, but on the real prop the blades are geared together so that they all will have the same blade angle from reverse to full feather. On the real aircraft, on the ground with engines shut down, the normal blade position is “flat”. For this detail set, however, unless you are depicting an emergency shutdown, in flight display, or maintenance being done to the engine, the propeller blade tips will be at a 90-degree angle to the airflow. You can refer to the finished photos for what the normal blade position is.

Painting the nacelles and props is fairly straightforward – the nacelles are painted to match the aircraft they’re installed on. and the spinners and de-ice boots (the big black area near the prop blade base) are a flat to semi-gloss black (depending on how long since the last prop overhaul). The propeller blades are aluminum, and I used Testors Model Master Metallizer Buffing Aluminum to paint the main blades. On my aircraft (and USAF European 1 and grey painted aircraft), the prop tips are painted black. To me, a stripe width of 2mm looks right. Oftentimes, there is a mark or an insignia on a single prop blade to designate which blade has to be positioned towards the ground when the aircraft isn’t flying. You can see this marking that I had on the bottom blade in the picture of the actual prop and nacelle-it is a star with lines coming out of it (it’s actually the Lockheed logo). I also put a spot of flat white in the hole at the middle of the spinner – this replicates the prop dome that can be seen in the spinner.

The inboard nacelles require that 2.25 mm be removed from the kit’s nacelle joint. This brings the propeller arcs in line with each other, as it is on the actual aircraft.

The only thing that I believe would improve this kit is a decal set with common propeller markings along with nacelle service markings. They are quite noticeable on the prop spinners and deicers, as they are angle markings and “No Step” painted on them with white paint.

I wish to thank Brengun for providing a sample of this fantastic detail set.