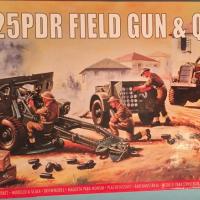 I built a lot of Airfix armor in my youth but never had this one before. Airfix has rereleased this kit as part of their Vintage Classics series and the kit is unchanged from the original 1963 molds except for newer decals.

There are 71 parts molded in a dark green plastic but there are no clear parts. There is very little flash which is nice but there are some seam lines that will need to be cleaned up, especially if you decide to use the crew. More about them later. The color scheme is shown on the back of the box and represents a vehicle of the 6th Armoured Division probably in Italy though it is not spelled out.

The interior is pretty basic but does include seats for 6, steering wheel and a driver. The body goes together quickly, and the fit isn’t too bad with just some minor putty needed on some seams. The wheels can be built to roll if you are very careful, but I glued them for strength.

Next up is the Limber which is just a few parts and then you are on to the 25PDR. Again, this is basic but does look the part except the barrel looks a little short to me and the later war muzzle brake is not included.

The gun and limber can be displayed either being towed by the Quad or in firing position and a crew of 5 is included for that option. They do look a bit larger than 76th/72nd scale and are in fairly static poses but at least they are there.

The paint guide suggested a Dark Earth and Khaki Drab camouflage, but I went for a green and black camo because I just like the look better. Since there are no clear parts I tried a couple options with Formula ‘560 and finally Testors Clear Parts Cement which did the job.

While not the most detailed kit it would work well as a wargame piece and could be used in Airfix’s Battles.

If you want to accurize this kit there is a really nice article over on the Airfix Tribute Forum.