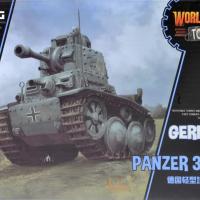 The Panzer 38 was a Czechoslovakian tank designed and built prior to World War 2. After Germany occupied the country, the tank was used successfully against the allies. World War Toonsis a “humorous first-person shooter and tankcombat game set in a whimsical, cartoon-inspiredworld”.

Meng has been expanding into the “egg” scale models over the last few years, and they are EGGzactly what the doctor ordered as a break from the complex builds most of us put ourselves through. Need I mention they are perfect for kids to put together?

The two plastic sprues, instruction book, and decals are contained within a clear plastic bag, inside a sturdy end-opening box.

The model parts are broken down conventionally. The plastic is a very good color match to German Panzer Grey, Schwartzgrau. The lower hull is separate, and includes “Meng Models” embossed on the bottom. I sanded this off. No glue is required, however, I ran Tamiya liquid cement around the joints to blend them in. Most of the panels that make up the upper hull superstructure needed careful sprue attachment removal, as they were located on beveled edges. Sprue cutters and gentle sanding are helpful here so each part butts up cleanly with the next. Some light sanding was also required along mold seam lines on some parts like the machine guns and cannon – normal modelling stuff!

I had most of the model built in a little over an hour. Smaller parts like the tow cable and pioneer tools were left off to be painted and detailed separately. The rubber tracks are one piece and slide over the wheels. They have nice detail on the outside, but nothing on the inside. I drilled out the two machine gun barrels and used a scribing tool to help flare the openings. I also drilled out the exhaust pipe.

Painting, fading and weathering were all done fairly quickly. Decals were applied and sealed between two gloss coats. The clear decal film disappeared and they look painted on. The decals were, however, a little off register.

Parts like the tow cable, tools, exhaust and antenna were attached last, and I called it done!

I had a great time building this little Panzer tank. It was a great canvas to practice applying armor weathering, mud, and dust.

Anyone could build this model and achieve pleasing results, however younger modelers may need some help when dealing with the sprue attachment points on the beveled edges.

My sincere thanks to Meng Models and the IPMS for the opportunity to review this quick, fun little kit.